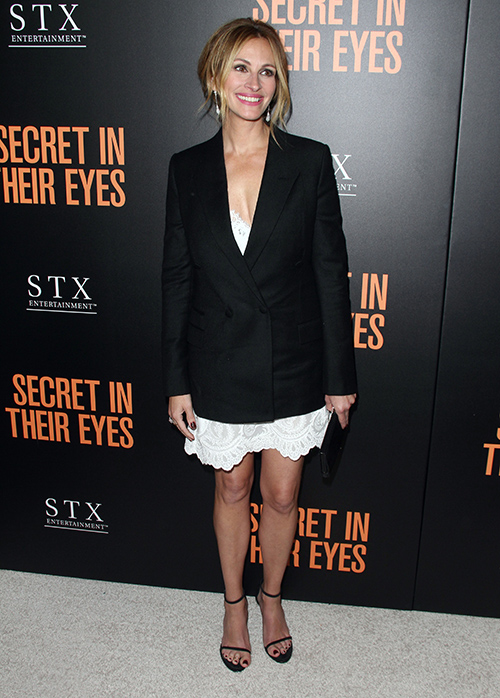 Julia Roberts and Danny Moder are headed for a divorce and living separate lives in different homes. It looks like Danny has taken up residency in a small house across the street from Julia’s Malibu mansion. As previously reported, Julia is nearly impossible to live with because she is such a control freak. While living together, Danny and Julia fought constantly and would probably have divorced years ago if they didn’t have children.

Marriage counseling reportedly hasn’t helped. Rather than live together as their divorce is in progress, Julia bought Danny a house near the family home. Moder allegedly packed his bags and happily moved out. National Enquirer published photos that might prove that the separation and move out have taken place.

The pictures show a ranch home with a Vespa and a Prius parked in the driveway. The motorcycle is apparently one of Danny’s most prized possessions. The Prius is the car Danny uses to transport the couple’s three children, twins Hazel and Fin (11) and Henry (8) back and forth to school.

What pushed Julia Roberts to move Danny Moder out of the couple’s oceanfront Malibu mansion? Tensions had been building for a while, according to an insider. Things really went into a tailspin when Danny did not attend Julia’s mother Betty Lou Bredemus funeral in February 2015.

That isn’t the only problem though. Danny is not only fed up with Julia’s need to control everything; he can longer tolerate Julia spending time with ex-boyfriends. A source divulged that Julia routinely vacations and parties in Mexico and Hawaii with men from her past.

The insider wasn’t specific about which of Julia’s many exes she’s been hanging out with, but it could be ex-fiancé Kiefer Sutherland, whom Julia famously dumped three days before their wedding. Maybe it’s ex-husband and crooner Lyle Lovett. Julia married Lyle on an impulse in 1993 and the couple divorced less than two years later.

Danny doesn’t enjoy spending time with Julia even when she is around. He would much rather spend time with his surfer friends, the insider claims. Whatever is going on, Danny Moder and Julia Roberts appear to be separated and not living together anymore.