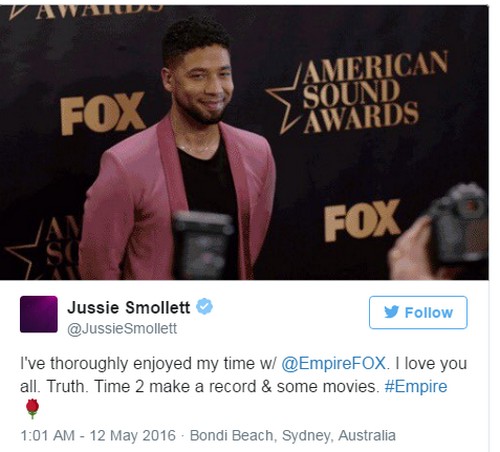 A tweet from the singer/actor sure makes it seem as if Jussie isn’t returning for Empire season 3 Jamal Lyon. Jussie’s tweet reads, “I’ve thoroughly enjoyed my time w/ @EmpireFOX. I love you all. Truth. Time 2 make a record & some movies. #Empire.”

This announcement via Twitter came just hours after the ‘Empire’ season 2 episode 17 titled, ‘Rise by Sin’ aired. During epsiode Cookie [Taraji P. Henson] admitted to Jamal that she snitched on Frank Gathers [Chris Rock], Freda Gatz’s [Bre-Z] father. Jamal’s mother is afraid if Freda sticks around a tragedy will follow.

It didn’t take long for Jamal to figure out Lucious Lyon [Terrence Howard] was behind Frank’s murder. Cookie warned Jamal that Frank had been a dangerous man who would have had every last Lyon killed. “You know that apple didn’t fall far from the tree,” Cookie cried after begging Jamal to drop Freda.

As Cookie predicted, the Freda apple didn’t fall far from the Frank Gather’s tree. Realizing Lucious was behind her father’s death in prison, the rapper grabbed a gun at the ASAs intent on taking out Lucious. Except Jamal ended up in the line of fire and took a bullet instead.

If it is Jamal who dies it ends one the strongest ‘Empire’ storylines. The series long conflict between Lucious and Jamal is incredibly powerful and emotional especially now that Jamal confronted Lucious for lying about his past and hiding his mother Leah Walker [Leslie Uggams] from the family.

Fans are floored and refuse to believe that TPTB actually would kill off their favorite Lyon brother. “No he’s bluffing he’s NOT going to be the Lyon who dies…It’s a different Lyon #Empire” one viewer responded to Jussie Smollett’s announcement.

Yet another viewer took Jussie Smollett to task, saying, “You can never mess with your fans like this Jussie for real now.” Is Jussie just teasing ‘Empire’ fans or is he really exiting the Fox drama?

What does Jussie Smollett’s tweet really mean? Is he teasing ‘Empire’ fans or is Jussie leaving the show? Is Jamal the Lyon who dies or is it another member of the Lyon family? Just as Cookie and Lucious began to reconnect will they be torn apart by Jamal’s death?

I’ve thoroughly enjoyed my time w/ @EmpireFOX. I love you all. Truth. Time 2 make a record & some movies. #Empire 🌹 pic.twitter.com/xeCONIhAlE