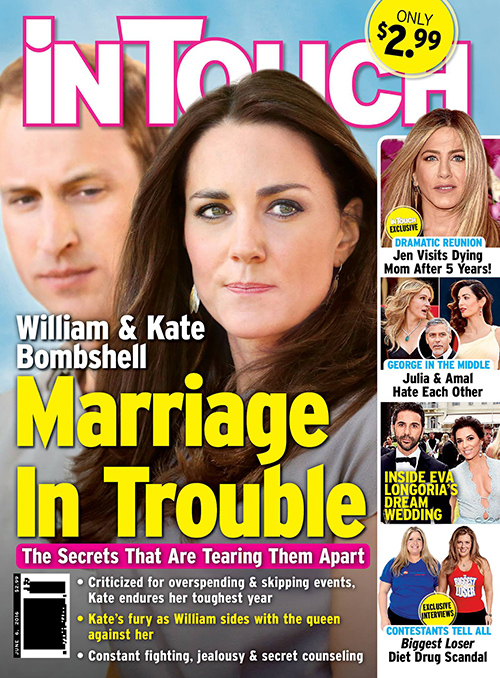 Are Prince William and Kate Middleton on the verge of a divorce? This week’s cover of In Touch Magazine features a photo of the Royal couple, and they appear to have seen happier days. The tabloid’s headline screams, “William & Kate Bombshell – Marriage In Trouble!”

Prince William and Kate Middleton are five years and two kids into their highly publicized marriage, but according to In Touch Magazine, the couple is “on the rocks” and headed to couples’ therapy. The tabloid is reporting that Will and Kate have all of “typical problems of a married couple,” but what is really tearing them apart is having to live in the public eye.

An insider who claimed to be close to the Royals dished to In Touch, “Their issues are on an even bigger scale, and they’re constantly arguing at the moment about the pressure Kate is under, William’s attitude about it and how to raise their kids. They’re going through a very rocky patch.”

Kate Middleton and Prince William are young, they’re raising two young kids (George and Charlotte), and they’re under a bit of a strain, being the future King and Queen of England is probably a tad stressful. Are they having marriage problems? Sure, what young couple with two kids doesn’t have disagreements? Are Will and Kate heading to couple’s therapy? Absolutely not, it will be a cold day in hell before Queen Elizabeth allows any such thing.

A split or couple’s therapy is really not an option for Kate Middleton and Prince William – besides the way their schedules are set up and the amount of events they both do, they could honestly go quite a while without even having to see each other.

What do you guys think? Is the royal marriage that bad? Even if it was, would they even be allowed to go to couple’s therapy and risk a nasty leak to the press bout their personal problems with each other? Share your thoughts in the comments below!