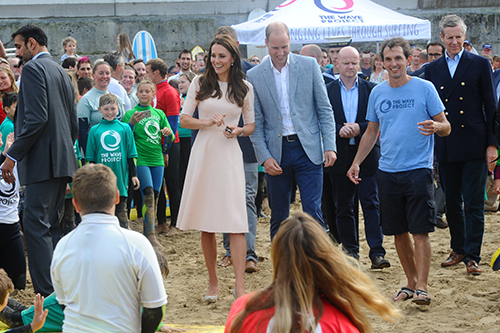 Kate Middleton and Prince William are indeed planning a third baby. There’s a new report that says the Duke and Duchess of Cambridge are looking to expand their family sooner rather than later, as there’s a good chance a royal pregnancy announcement might happen before sister Pippa Middleton’s star-studded wedding.

Is Kate Middleton’s pregnancy going to hinder Pippa Middleton’s wedding plans? Will a Kate Middleton baby bump steal Pippa Middleton’s thunder at her James Matthews nuptials? Are Prince William and Kate Middleton planning a baby as a way to bury all the bad press they’ve been getting lately? That’s what royal observers can’t help but wonder as sources close to the royal couple say that they are definitely working on bringing a third child into this world.

According to Us Weekly, one source even said that 3-year-old Prince George and 16-month-old Princess Charlotte might get another sibling sooner than expected as Kate Middleton and Prince William want to get pregnant before Christmas. This is going to be great news for the royal couple, but bad news for Kate Middleton’s sister Pippa Middleton, who is currently planning her wedding.

Of course, Kate Middleton and Prince William won’t let Pippa Middleton and James Matthews’ wedding stop them from getting pregnant. The Duke and Duchess of Cambridge have been plagued with negative press lately, especially for the multiple and lavish vacations they’ve taken this summer while barely engaging in any of their royal duties or charity work. Kate Middleton knows that she instantly becomes the media darling the moment she announces her pregnancy and that’s why both she and Prince William are not letting anything stop them from repairing their image right now.

With a Kate Middleton pregnancy, the public is temporarily going to forgive the royal couple for their lack of work ethics while building up excitement for the birth of another royal baby. Pippa Middleton, meanwhile, has no choice but to hope that Kate Middleton won’t get pregnant until after her much anticipated James Matthews wedding. Pippa Middleton knows that a royal pregnancy will kill any chances of her getting good publicity for her wedding and that’s something she simply doesn’t want to deal, especially since she’s waited for her moment to get married for at least ten years now.