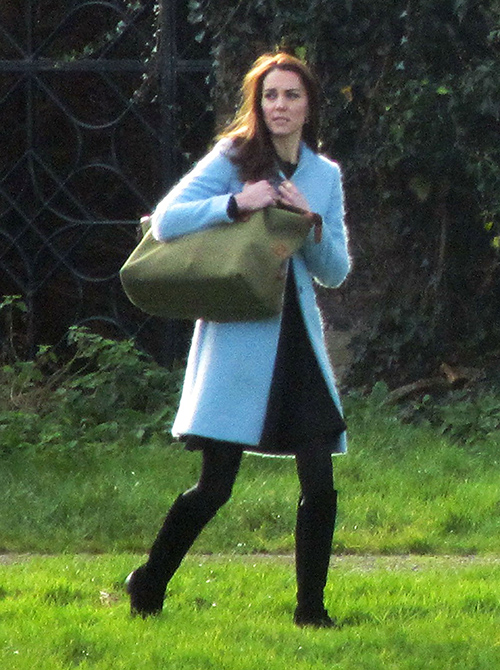 Kate Middleton looked exhausted while attending the ceremony marking the end of the RAF Search and Rescue Operations on Thursday, February 18 in Anglesey. Is the Duchess begging Prince William to abandon Royal life and return to the couple’s first home in Wales?

Maybe Duchess Kate was just completely worn out from guest editing the special Young Minds Matters blog for the Huffington Post U.K. the day before. That might be the reason the Duchess of Cambridge’s face seemed drawn and washed out.

After all, Duchess Kate had a very busy day and then had to travel to Wales immediately with no break whatsoever. The Duchess of Cambridge didn’t even put much effort into her outfit for the day. Princess Kate wore the red LK Bennett coat she has worn twice before.

Has the constant round of Royal obligations coupled with the responsibilities of motherhood taken their toll on Kate Middleton? Did visiting Anglesey cause Duchess Kate to remember the simplicity of her first days as a Royal bride?

Has the Duchess of Cambridge had enough? Is Kate ready to pack it all in and move Prince George and Princess Charlotte off to the quiet town in Wales? Would Prince William agree to do so?

Queen Elizabeth would probably tell Duchess Kate to keep a stiff upper lip and fulfill her Royal responsibilities like a good Royal wife if Prince William were to even suggest stepping aside.

There has been an internal battle raging behind the walls of Buckingham Palace for quite some time over who should be next-in-line to the throne. Royal insiders have previously reported that if Queen Elizabeth could have her way, Prince Charles would be removed from the line of succession in favor of Prince William.

Are the responsibilities expected from the future Queen more than Kate Middleton bargained for? Could the Duchess of Cambridge return to the quiet town in Wales after living in the 10-bedroom Anmer Hall and the plush apartment at Kensington Palace?