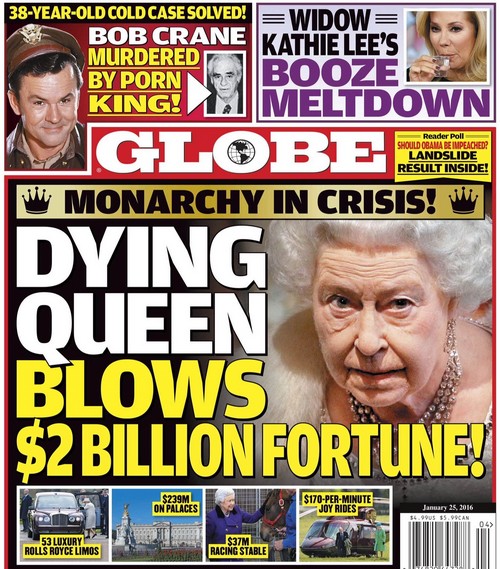 Kate Middleton is going to be furious if the she needs to fire nannies! Allegedly Queen Elizabeth’s debts are causing massive staff reductions. Would Duchess Kate’s household staff be the first to go?

What happened to all Her Majesty’s money? Queen Elizabeth has reportedly spent a ridiculous amount of money over the years in an attempt to conceal the scandalous lives of Prince Charles, Camilla Parker-Bowles, Prince Andrew, Prince Harry – the list goes on.

Sources recently divulged to GLOBE that Queen Elizabeth throws away money on an “addiction to horse racing. Worried that Queen Elizabeth will die a pauper, creditors are allegedly running scared and calling in Queen Elizabeth’s debts – and they want to be paid in cash immediately. Yes, you did read that correctly! But, are you buying these claims?

Gasp! There may not be enough money in the Royal bank accounts to cover the salaries of the nearly 750 employees on the Royal Family’s payroll. Does that mean Duchess Kate may need to trim the Cambridge’s staff at Kensington Palace and Anmer Hall?

Will the Duchess of Cambridge be forced to give up the nannies that care for Prince George and Princess Charlotte? Will anyone who performs a task that Princess Kate and Prince William can accomplish on their own be sacked?

Can you imagine Duchess Kate trying to clean the 20-room apartment at Kensington Palace or the couple’s 10-bedrooom Anmer Hall without dozens of staffers? Maybe the future Queen and the other residents of Kensington Palace can combine resources and keep some housekeepers and nannies?

How did Queen Elizabeth’s fortune disappear? A Royal finance expert claims that the monarch has spent nearly $37 million on horses – breeding, competitions and wagering on thoroughbred horse racing. Another $15 million allegedly was paid out in “hush-money to key players, including women and homosexual lovers.”

But the most money of all appears to have been spent on the Duke and Duchess of Cambridge. This Royal finance expert says that Queen Elizabeth presented Kate Middleton with a $10 million dollar necklace when Her Majesty was told of Duchess Kate’s pregnancy – but the so-called insider didn’t reveal which one. Probably Prince George, don’t you think?

Anmer Hall apparently required $1.5 million in renovations before the Duke and Duchess of Cambridge were able to take up residency. And the apartment in Kensington Palace was allegedly remodeled to the tune of $7.6 million!