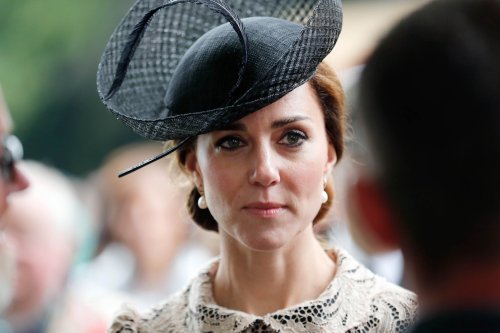 On July 1, Kate Middleton made an appearance with Prince William, Prince Harry and Prince Charles, but onlookers notice immediately how drawn, haggard and exhausted she looked at the Somme battle memorial in France. Have Kate’s shoddy (and non-existent) eating habits caught up with her?

Is Kate exhausted from going hungry and stressed out by infertility? What’s at question is why is Kate so painfully thin? Is Katie losing weight because she’s trying to stay thin for egotistical reasons – or is she so stressed out over raising two kids and all her royal obligations that she can’t find time to eat?

Whether it’s intentional or not, palace insiders report that Kate’s weight has dropped to less than 100 pounds. Since Kate Middleton is 5’9”, weighing less than 100 pounds is shockingly skinny – at her height, medical experts recommend 130 pounds or more. She’s practically cadaverous at the weight she’s at.

What is driving this issue?

If Kate Middleton is trying to look better by being so thin, she’s missing the mark. The lack of fat on her body has seemingly taken a toll on her face. A recent study by a plastic surgeon and published in the New York Daily News explained that being too thin causes wrinkles.

Dr Jacob Steiger wrote, “A full face looks younger than a gaunt face.” The paper also quotes another doctor that said, “Try to keep your weight around the ideal range and if you do that, you’ll look younger than if you lose a lot of weight.”

That might explain why Kate Middleton looks so drawn in these recent photos and why we can count every line in her face. Is the strain of being a Royal dragging Kate down? In fact, both of the Cambridges are looking a bit rough around the edges.

Prince William has even less hair than his 67-year old dad Prince Charles and that’s aging him prematurely. Are William and Kate looking less than their best because of the stress of infertility as they try for baby number three?

Other Royal sources report that Prince William is “worried sick” about Kate Middleton and her rail-thin appearance and reveal that not only is Kate not eating, but she’s also not sleeping well.

Some credit her lackluster appearance on having two young children at home, but it seems like more than that. Reportedly, the Royal family and the Middletons are pushing Kate to put on “a stone by Autumn” which is the equivalent of 14 pounds.

That still wouldn’t put Kate Middleton on the chart of “normal” for a woman of her height and age, but it would be a good start to her getting healthy. The criticism and concern over Kate’s weight won’t diminish so long as she keeps making public appearances, such as this tribute to victims of the Battle of Somme in France, looking so unhealthy.

What do you think? Is Kate Middleton too thin? Is Kate’s too-low weight affecting her looks and aging her prematurely? Share your comments below and check back with CDL often for the latest news and gossip on The Royals.