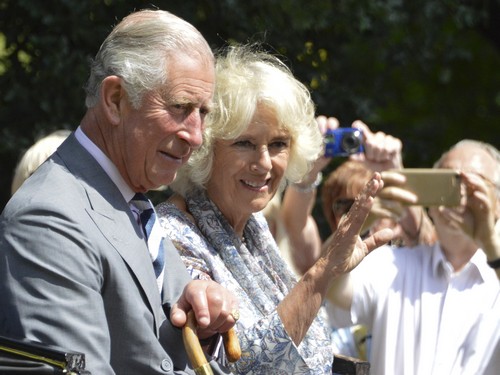 Charles met several people at Penny Brohn UK’s who have benefited from the cancer center’s Whole Life Approach program on July 25. While at the center the Prince of Wales also learned more about the health benefits of Nordic Walking. Charles has been a patron of the center since 1997.

While Charles was meeting with staff and volunteers at the Penny Brohn UK Center Camilla attended the official opening of the new Poppy Pods Village for the Armed Forces at the Tile Barn Outdoor Center. Camilla unveiled a poppy seed shaped plaque and met military families who are currently using the 20 wooden camping pods free of charge.

The elder Royal couple’s schedule is usually packed with engagements and rarely do we hear that Charles and Camilla have used taxpayer money for expensive vacations. At 68-years-old Camilla Parker-Bowles is becoming one of the hardest-working Royal ladies in the family. Definitely much more dedicated than Kate Middleton.

The Duchess of Cambridge schedule consists of opening shops, attending dinner parties and other frivolous obligations that anyone member of the Royal family could fulfill. Now we hear that Kate Middleton and Prince William have once again borrowed the Duke of Westminster jet and are enjoying a secret vacation in Pau-Pyrenees.

Maybe Kate needs to rest up before the official visit to Canada this fall. The Duchess of Cambridge must conserve all her energy in order to tour British Columbia and the Yukon Territory. Yet Camilla Parker-Bowles needed no break in her schedule for the official tour of Australia and New Zealand in 2015 with Prince Charles.

As a members of the younger generation of Royals Kate and William should be taking on more Royal responsibility, not performing less. But no, the Cambridge’s do the minimum required and are not earning their keep.

British taxpayers pick up the tab for Kate’s helicopter rides back and forth between Kensington Palace and Anmer Hall. Prince Charles pays for Kate’s expensive wardrobe. The least Kate could do is add a few extra appearances to her schedule.

What kind of example are Kate and William setting for Prince George and Princess Charlotte? Isn’t it sad when you say Camilla Parker-Bowles is possibly a better Royal role model than Kate Middleton? Let us know in the comments section then come back to CDL for more hot royal news!