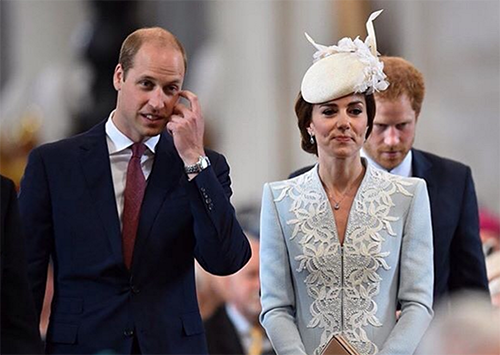 Kate Middleton is in desperate need of plastic surgery. The photos from the Thanksgiving Day service at St. Paul’s Cathedral indicate that the Duchess of Cambridge is not aging gracefully. Botox and fillers and a mini-facelift aren’t going to cut it this time. Kate needs a full facelift, a neck lift, and maybe even an eye lift.

The Royal family gathered at St. Paul’s Cathedral for a mass of thanksgiving in celebration of for Queen Elizabeth’s 90th birthday on Friday, June 10. It also happens to be Prince Philip’s 95th birthday. Lots and lots of photos were taken. Kate really should have known better than to be caught with her face like that. Kate had to know there were going to be dozens and dozens of cameras.

Take a good look at the photo of Kate standing next to Prince William and in front of Prince Harry. Lips puckered, every wrinkle and frown line on Kate’s face pops right out. Look closer and you’ll see Kate’s getting a bit of a wattle and her jawline is drooping. How you get a wattle when your Hollywood stick thin is beyond us.

At 34 years old, Kate really shouldn’t look this haggard and wretched. The Duchess of Cambridge is smiling in several photos but you can still see deep lines and wrinkles around her mouth and eyes and her jaw line is definitely drooping.

Honestly, Harry doesn’t look too pleased to be there either. Maybe he had a night of partying with singer Ellie Goulding and was a bit hungover. Prince William looks like he’d rather be someplace else, anywhere at all, just not at the celebration for Queen Elizabeth.

Do we need more proof that Kate Middleton is due for a plastic surgery makeover? In the dozens of photos circulating on social media, there is one of Kate getting out of a car looking utterly miserable. Kate isn’t smiling at all but her jaw is clenched ever so slightly. And you can see the wrinkles in her neck, and once again the drooping jaw.

When Kate Middleton gets back to Kensington Palace or Anmer Hall, she may want to make a few discreet phone calls to top plastic surgeons for a consult or two. Prince William may want to consult with a hair transplant professional. The future King really needs to do something about that balding head before it is absolutely too late to do anything at all.

At the rate the Royal couple is aging, Kate and William are to going to look the way Prince Charles and Camilla Parker-Bowles do in their late 60s before William and Kate hit their 40th birthdays.