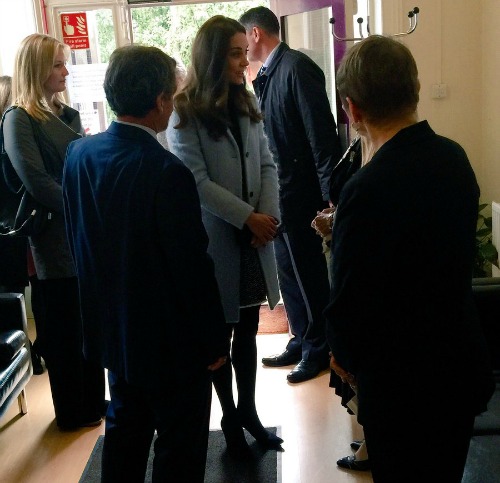 New reports suggest that Kate Middleton is pregnant and telegraphing the sex of her baby using her color-coded attire. A bulky blue Mulberry coat Kate Middleton wore when visiting the Nelson Trust Women’s Centre in Gloucestershire has caused quite the stir. The oversized blue coat had tongues wagging and wondering if that is Kate’s subtle way of letting the public know the Cambridge’s are expecting a baby boy.

Photos of Kate Middleton dressed in a black turtleneck and kilt-like wrap skirt led to more speculation about the possibility of a third Royal baby. From some angles Kate appears to have a slight baby bump. In other photos, there’s no apparent bump – just Kate Middleton looking happy, healthy and well rested.

Royal watchers noted also – Kate was very enthusiastic upon meeting one young girl and accepting the wee one’s gift of flowers. In other photos published by Mail Online Kate Middleton is seeing cooing at a baby boy. It is noted the Duchess of Cambridge’s maternal instincts appeared to be in high gear causing additional speculation about another Royal baby. Are Kate’s hormones in overdrive because the future Queen is nearing the end of the first trimester?

Poor Kate – everyone is constantly speculating whether or not she’ll produce another Royal baby. Every few months we hear Kate’s about 2 months along and that news inevitably proves to be false. If Kate an official Royal announcement were made that Prince William and Kate Middleton were expecting, the Royals do not publicly disclose the gender of the baby.

When pregnant with Prince George the Duchess of Cambridge caused quite a frenzy after accepting a stuffed animal for a child. Everyone within earshot swore to the high heavens that Kate said she loved the trinket and it would make a love gift for her baby girl – but Kate stopped dead before the entire word out slipped from her lips.

The Buckingham Palace PR machine’s stance is that Royals parents are not aware of the baby’s gender before giving birth. At that time, perhaps Kate Middleton was wistfully hoping for a girl or knew the Cambridge’s were expecting a boy and played coy with the media.

Royal watchers constantly look for the most subtle of clues or hints about Queen Elizabeth’s health and possible retirement, Camilla Parker-Bowles drinking, Prince Harry’s dating status and the state of Prince William and Kate Middleton’s marriage. Is this wishful thinking on the public’s part or could Kate be pregnant with a third Royal baby? Come back to CDL for all your Royal news and reports.

Thank you to everyone who shared their personal stories and experiences with us today. pic.twitter.com/Xa82DPbHqv

Some of the women who have used the services tell HRH of their personal experiences and the impact @TheNelsonTrust has had on their lives. pic.twitter.com/ilE96DKNnA

Arriving @TheNelsonTrust Women’s Centre in Gloucester today to learn about the important work they do to support women and their families pic.twitter.com/TUbbKp1tRf