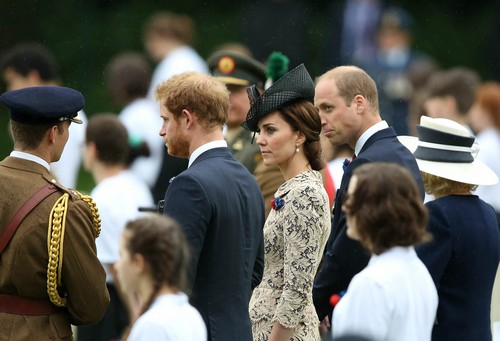 Kate Middleton has everyone wondering if she’s pregnant with a third Royal baby. Rumors on the Internet ask if the Duchess of Cambridge hiding a baby bump during the Somme 100 Commemoration services in France?

The gray and black zig-zag print Missoni coat Kate Middleton wore was a little bit bulky and Kate kept a clutch in front of what might be a baby bump quite a bit during the services. Even the white lace over black peplum dress left some asking if Kate is pregnant again.

There probably isn’t a third Cambridge baby on the way. Kate already gave Prince William an heir and a spare, her job is done. Now all Kate needs to do is show up for Royal obligations, including solemn occasions such as the Somme 100 Commemoration twilight services

Prince William, Prince Harry and Kate Middleton attended the military-led vigil on the eve of the 100th anniversary of the Battle of the Somme where 70,000 British and Commonwealth soldiers were commemorated.

Speculation that Kate is pregnant comes around every few months or so – not long after Princess Charlotte’s birth in May 2015. Anytime Kate wears something just a little bit oversized or holds a clutch in front of her the world starts wondering if Prince William and Kate Middleton are adding to the Royal family.

The pregnancy rumors have included reports that Kate is pregnant and expecting twins.

But Kate has become scary skinny over the past several months and there have been reports that Prince William thinks Kate isn’t healthy enough to have another baby.

It does seem Kate has become more and more obsessed with diet and exercise since Princess Charlotte’s birth. Maybe Kate wore the coat to cover up the fact that she is getting more and more anorexic looking every day?

The Missoni coat Kate Middleton chose to wear to the Somme 100 twilight commemoration was bulky but we don’t think the Duchess of Cambridge was hiding a baby bump. If Kate is expecting a third Royal baby we’ll find out soon enough won’t we?

Kate suffered from severe morning sickness with both Prince George and Princess Charlotte and the Cambridge’s were forced to make the announcement of both Kate’s pregnancies a bit sooner than the couple had planned. Come back to CDL for all your Royal news and view!

Kate Middleton, Prince William and Prince Harry attend the 100th anniversary of the start of the battle of the Somme at the Commonwealth War Graves Commission Memorial in Thiepval, France, where 70,000 British and Commonwealth soldiers with no known grave are commemorated on July 1, 2016. FameFlynet

The Duke and Duchess, Prince Harry and Sir Timothy Lawrence arrive at Thiepval for a twilight vigil to commence remembrance on the eve of the Battle of the Somme 100 year anniversary. #somme100. 📷PA.