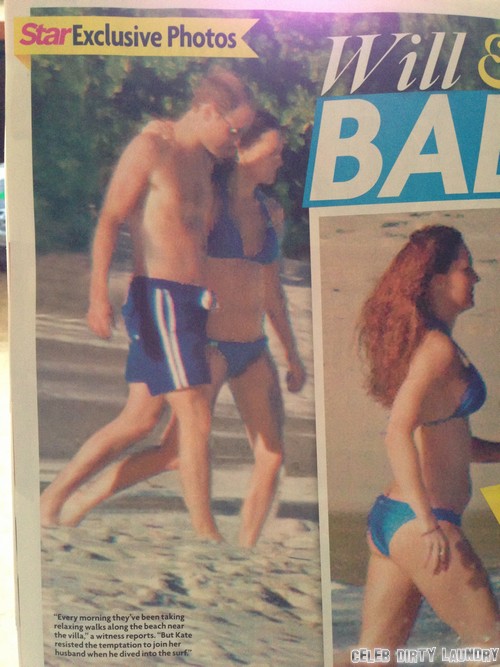 Kate Middleton missed out on the Mustique Middleton family vacation this year. Royal watchers have posed the question – is the Duchess of Cambridge pregnant with her third Royal baby?

Carole Middleton flew off to Mustique with Michael, Pippa and James to celebrate her 61st birthday minus Kate Middleton and Prince William. What possible reason could have kept Princess Kate from enjoying a sunny holiday on a private island? The world will latch onto any minor detail to go on Royal baby watch

Is there something up between Duchess Kate and Pippa Middleton? Is Pips upset that Kate put the kibosh on Pippa’s budding romance with Prince Harry?

Maybe the Duchess of Cambridge is on the outs with Carole Middleton? Is there lingering resentment over last year’s Christmas and New Year’s plans? Or is Princess Kate two months pregnant and suffering from horrid morning sickness as previously reported?

Pregnancy and fallings out aren’t the only reasons the Duke and Duchess of Cambridge may not have gone to Mustique this year. Perhaps Queen Elizabeth told the couple to stay home and spend time with George and Charlotte before the Cambridge’s take on a full calendar of Royal obligations over the next few months.

A state visit by King Felipe and Queen Letizia is planned for early March. We’re certain Prince William and Kate Middleton must be in attendance for the state dinner that will be held in the Spanish Royal couple’s honor.

Duchess Kate and Prince William are also busy preparing a Royal tour of India and Bhutan this spring. Details have not yet been announced. It is believed that the Cambridge’s will spend at least two weeks either in March or April visiting the two countries.

Don’t forget, Queen Elizabeth’s 90th birthday celebration is the grandest Royal event for 2016.Then there is the Cambridge’s fifth wedding anniversary in April and Princess Charlotte’s first birthday in May.

Prince William allegedly is not ready for another baby. Those in the know previously revealed that the Duke of Cambridge wants to space out the wee ones a bit more. Princess Charlotte was born just about six weeks before Prince George’s second birthday.

If Duchess of Cambridge is two months along Princess Charlotte and the third baby would be only 16-months apart. That is a little close for comfort.

Was it a falling out with Carole Middleton and Pippa Middleton, another Royal pregnancy or a calendar stuffed with Royal responsibilities that kept Kate Middleton and Prince William for enjoying the yearly Middleton Mustique family vacation?

The Duchess of Cambridge will join @HuffPostUK as guest editor from Kensington Palace on Wednesday 17th Feb pic.twitter.com/vLZyliknRn