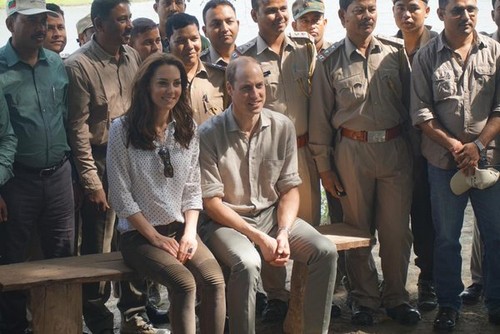 The skinny jeans Kate Middleton wore on safari have caused a scandal. Queen Elizabeth and Camilla Parker-Bowles must be disgusted that Kate wore jeans – jeggings or whatever you want to call them – tight enough to accentuate more of Kate’s assets than are acceptable for a Royal wife.

What was Kate thinking when she rolled out of bed for a 7:15 am safari outing on the fourth morning of the Cambridge’s trip to India? An appropriately fitted pair of khakis couldn’t be found anywhere? This particular pair of pants in Kate’s wardrobe remind Royal watchers more of leggings than actually skinny jeans.

The Duchess of Cambridge made certain photographers got a couple of shots of her derriere in the jeans that probably cut of the circulation between her waist and ankles. Quite honestly we don’t think Kate was wearing knickers, not even a thong. Did the white dress skirt blowing up incident teach Kate nothing about appropriate attire?

Later in the day Kate Middleton donned a knee-length pink/red dress and went out to feed baby elephants and baby rhinos. Kate bent at the waist to pet a baby rhino and it’s a good thing the photographer had enough sense to take the photo from the side. If not the world might have been treated to yet another pic of Kate’s backside.

What is with the hand grasping in front? The best way to put it is Kate looks as if she’s doing a bit of lady bit grabbing. In nearly every photo of Kate standing somewhere her hands are grasped in front well below the waist. Please, move your hands up to your waist, that’s a much more ladylike pose.

Kate has been disrespectful and rude during much of the trip to India. At the reception for the Bollywood Charity Gala Kate was presented with a huge bouquet of light pink roses. She graciously accepted the beautiful flowers and then stood off to the side with a scowl on her face as the second-in-line to the throne gave a speech.

The Duchess of Cambridge refused to participate in activities such as dosa making and tasting, and a ride in a racing simulator. Camilla Parker-Bowles may be a lot of things, but when she travels with Prince Charles you will always see Camilla right in there trying things with Charles. Let’s not forget the knife-wielding fun the couple enjoyed while touring Australia and New Zealand last year.

Camilla never passes up an opportunity to sample different cuisines. It’s been widely reported that Camilla can eat her way through a farmers’ market without any problem at all.. Kate couldn’t even take a bit of a dosa Prince William so lovingly made for her. Of course this lead to speculation that Kate Middleton is anorexic.

Queen Elizabeth will need to sit down with Kate and have a nice long talk about her wardrobe and that out-of-control hair. Even Camilla Parker-Bowles knows how to behave like a Royal lady, at least in public.