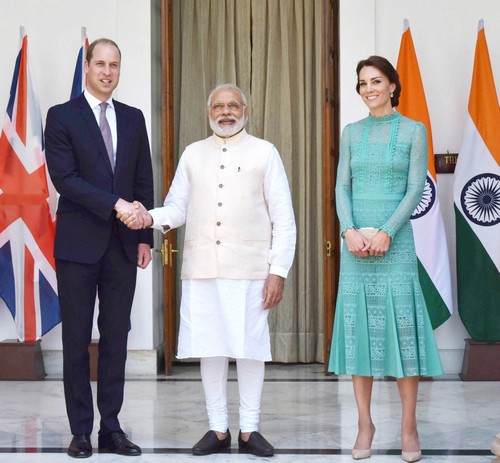 Kate Middleton has done it again with a Wardrobe Malfunction on the India tour! Kate showed off her underwear and flashed her bare butt with Prince William, managing a Marilyn Monroe moment at an official outing that showed off her royal knickers, shocked onlookers and disgusted Queen Elizabeth with her lack of decorum.

Prince William and Kate Middleton were laying wreaths on an iconic war memorial in Delhi that honored India’s lost soldiers in World War I, in particular, when Kate made a mess of the solemn occasion with a wardrobe malfunction that showed her underwear and fussing with her out of control hair.

By now it seems like Kate would have her royal tailors weight the hems of her shorter dresses to keep such a thing from happening and embarrassing the Royal family. But that wasn’t Kate Middleton’s only faux pas of the trip.

When Prince William and Kate were at an innovation conference, he was shown how to use a dosa machine – it’s essentially an automatic crepe and pancake maker. The prince cooked one up, nibbled it and declared it delicious.

But then when he offered a bite to Kate, she rudely waved it away and turned up her nose. Is Kate Middleton so anorexic that she fears a tiny nibble of a sweet treat made by her royal hubby would send her off the deep end? As always, Prince William had to cover for his wife’s rude behavior.

While many have unfavorably compared Kate Middleton to Princess Diana, we also have to remember that Diana herself had a few wardrobe malfunctions early on in her career as a royal. In one incident, she bent over in a strapless gown to climb into a car and showed most of her breasts.

But, of course, Queen Elizabeth was also often disgusted with the antics of Princess Diana as well, so perhaps there are similarities there. Clearly Kate’s outfit was poorly chosen for the day of events that she and Prince William attended – and she’s struggled with poor hair and wardrobe options the whole trip.

As Kate Middleton and Prince William stood for a salute at the Tomb of an Unknown Soldier in Delhi, she continued to fight both her hair and dress to prevent further revealing her bottom half which detracted from the gravity of the moment.

But perhaps worse was Kate fussing with her hair and outfit during a visit to the site where India’s beloved Mahatma Gandhi was assassinated. Clearly selfish Kate had fashion more on her mind than paying respects to the people of India.

A weighted (or longer) skirt, practical bun in her hair or a hat as Queen Elizabeth favors – would have had Kate looking like a future Queen of England rather than a flighty fashion-focused diva. Let’s hope Queen Elizabeth gives her granddaughter-in-law some advice on royal decorum upon their return from India.

Prince William gamely tried his hand at everything while in Delhi including a racing simulator, the crepe machine, and other offerings. Kate Middleton, however, stood to one side laughing at her husband’s antics while not participating herself.

Princess Diana would turn over in her grave if she knew that although Prince William married a commoner, he’s saddled with a snob who grew up wealthy and privileged – and seems disinterested in being a Princess of worth and good works.

Let’s hope Kate Middleton makes it through her tour of India with Prince William with no more embarrassments for the Royal family and her knickers properly tucked away! Check back with CDL often for more updates from The Royals tour of India and more on Kate’s antics.