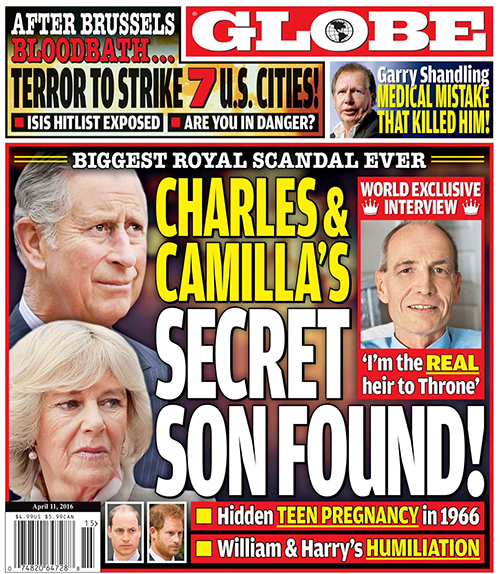 Kate Middleton beware! If Australian government executive Simon Dorante-Day can prove he is Prince Charles and Camilla Parker-Bowles secret love child, the Duchess of Cambridge will never be Queen. Kate may never be Queen!

Simon wants a DNA test done in order to finally remove all doubt. Right now, the only thing the Aussie really has to go on is the fact that his adoptive grandparents, Winifred and Ernest Day, worked in one of the Royal households. The couple’s daughter, Karen, and her husband, David, adopted Simon when he was 18 months old.

Globe interviewed Simon, 50, who revealed his adoptive grandmother Winifred told Simon many times “that I was Camilla and Charles’s child.” Why didn’t granny or Simon come forward and lay claim to the throne after Prince William was born? Apparently, Winifred was very afraid for Simon’s safety and concerned about what would happen if the truth ever came out.

Oh, and the Days’ were rewarded handsomely for their silence. Following Simon’s adoption, his adoptive parents Winifred and Ernest suddenly came into quite a bit of money. More than could be justified by their low level jobs. Are we supposed to be impressed by that revelation?

Simon’s points out that his adoptive grandfather, Ernest Day, was awarded an Imperial Service Medal by Queen Elizabeth as further proof that there was a Royal cover-up surrounding his birth parents. This honor is presented to selected civil servants who, upon their retirement, have completed 25 years of service. Simon’s adoptive grandfather just happened to be one of those selected – really not that big of a deal.

Despite being ridiculed, receiving death threats, and having to move around Australia for security purposes, Simon is no longer afraid. He is determined to prove it all. “I’m not scared to take on royal lawyers. I want DNA tests. I want the truth to come out,” Simon Dorante-Day said during the interview with Globe.

Why didn’t Simon come forward after Camilla and Charles married in 2007? A divorced heir-to-the throne marrying a divorced woman who had been his mistress for years caused a scandal, but Charles will still be the future King. Wouldn’t Camilla Parker-Bowles want her son to be second-in-line to the throne?

One might think Camilla would have revealed all when Prince William announced his engagement to Kate Middleton. Or after the William and Kate married? Everyone knows Camilla will take any opportunity she can to humiliate the Duchess of Cambridge. Why not do so by proving another man is actually entitled to be King after Charles?

This is all ridiculous nonsense, don’t you think? Simon Dorante-Day says he doesn’t want to lay claim to the throne or to money. The Aussie wants nothing, only to meet his alleged brothers Prince William and Prince Harry.

Simon also wants the opportunity to get to know Queen Elizabeth, the woman he believes to be his grandmother. We’re guessing that Simon would like to get to know Kate Middleton, Prince George, and Princess Charlotte, too.