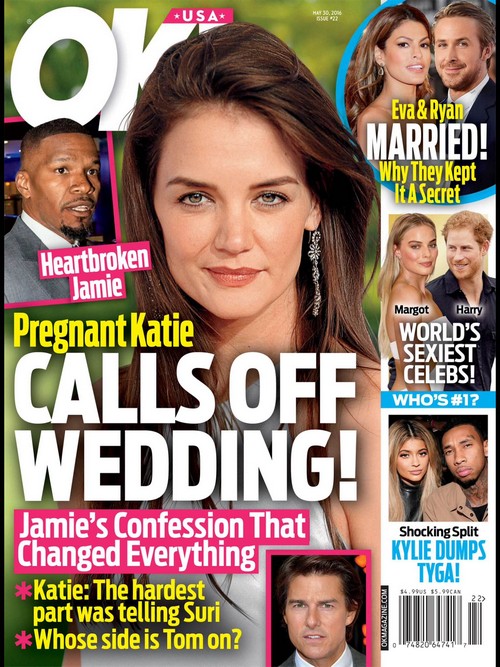 Is a pregnant Katie Holmes alone and devastated by Jamie Foxx’s refusal to get married? Reportedly Jamie wants to wait until the baby arrives but Katie wants to put a rush on things and make things legal before the bundle of joy arrives.

An insider told OK! magazine recently that Katie has been excitedly planning a wedding and looking forward to starting a family with Jaime. Katie’s daughter Suri and Jamie’s youngest daughter Annalise have been looking forward to finally becoming sisters.

Is it true that the wedding isn’t going to happen anytime soon? The source claims Katie is about four months pregnant and Jamie is just freaked out and feels things were moving too fast. The actor allegedly told Katie it probably would be for the best if they wait to get married until everyone has a chance to “settle into life with a new baby.”

That’s when Katie Holmes flew off the handle and told Jamie they might as well cancel the wedding completely this insider divulged. Jamie backing out of marrying Katie shouldn’t come as a shock. After all Jamie Foxx managed to escape marrying the mothers’ of his daughters’ Annalise and Corrine.

Those close to Jamie say he’s eventually going to do the right thing and put a wedding band on Katie’s finger the insider says. Jamie wants to get married, he just wants to wait until Katie is able to relax and enjoy the party without the pressure of worrying about a newborn.

If Jamie Foxx does decide to walk away and not marry Katie Holmes friends say the actor will always be there for Katie and their child. But is that good enough for Katie?

More than likely the last thing Katie wants to do is raise another child as a single mom. That’s basically what Katie has been doing since divorcing Tom Cruise. Suri Cruise’s dad rarely sees his daughter though the actor provides for the 10-year-old financially.

There is a ton of tension between the couple right now even though Jamie and Katie truly love each other. Those close to Katie know that eventually the actress will calm down and the wedding will be back on.

What happens next for Jamie and Katie? The source says eventually Katie will calm down and see the reasons behind Jamie wanting to wait to get married and there will be wedding bells in Katie and Jaimie’s future, just not as soon as Katie had planned.