Keeping Up With The Kardashians Recap – ‘The Big Launch’: Season 11 Episode 8 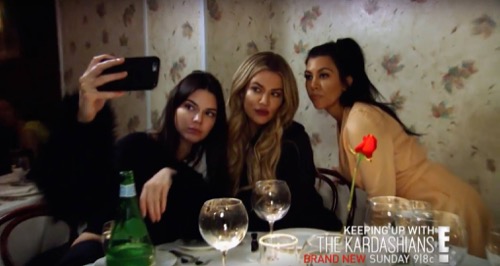 Keeping Up With The Kardashians returns tonight with an all new Sunday January 10, season 11 episode 8, called “The Big Launch” and we have your weekly recap below. On tonight’s episode, Kourtney Kardashian isn’t ready for a big product launch in New York City, which gets the attention of her sisters.

On the last episode, Kendall and Kylie tried to sort out their differences before their time in paradise came to an end; at the same time, Kim and Khloé made it their mission to help Kourtney get her mojo back. Later, a surprise visit from Scott threw the family for a loop. Did you watch last week’s episode? If you missed it, we have a full and detailed recap right here for you.

On tonight’s episode per the E! synopsis “Kourtney isn’t ready for a big product launch in New York City, which gets the attention of her sisters. Meanwhile, a very pregnant Kim accidentally upsets her best friend Jonathan; and Kylie receives some sisterly advice about making the most out of her newfound opportunities.”

Did she or didn’t she? That’s the question on everyone’s mind when comes to Kourtney and her latest app.

Apparently the sisters as in all five of them had come up with an idea to launch their apps around the same time and Kourtney is the only one whose app is late. Kourtney later told her sisters that it wasn’t her fault. She explained that it was the people helping with the apps that had actually dropped the ball though no one else was quite buying it.

Especially Khloe and Kim who can recall their sister dropping everything else because she had recently had a baby. So they think Kourtney is the reason why her app is late and they’re not blaming anyone else for what she caused. However, Kourtney refused to take responsibility for her situation and she also wanted to cancel her appearance at the App announcement if she’s not going to be a part of it.

And that was a misconception. Kris had to call the people helping with the app and the launch party and it turns out they still wanted Kourtney to take part in the event in New York. They told her they would like for her to speak about her app. Just so she could garner some interest even if it’s not going to launch the same time as everyone else’s.

But that last part proved to be the thorn in Kourtney’s side. It’s not that she was particularly upset with her app being late in fact she was fine with it, but she didn’t want it to be the only late one because it she knew it wouldn’t look good. And it didn’t.

Therefore, the family needed to strategize once they all got to New York about what answers they would give the interviewer from Fortune Magazine. The sisters all went out to dinner together and there they discussed their look for the event and what they were going to say. And Kim came up with the idea to say Kourtney’s app is more Lifestyle hence the reason it’s coming out in December.

Although Kourtney tried to tell her sister at dinner that she had just had a baby and that’s why her app was running late. And neither Kim nor Khloe were buying it. So that’s how Kim wounded up saying “you’re not special.

She said other women had babies and lots of things going on but that hadn’t stopped them from working. Which is true. Yet her line came out as harsh and that’s why Khloe then turned around to call Kim “Felicia”.

And funnily enough Kim ended up needing to ask for a favor seeing as she was so busy launching her app that she had to turn to Jonathan for help. It seems she didn’t want to part from her assistant so she asked Jonathan to drop off her urine sample at the doctor’s and while he was outside she figured he could also get a box of cronuts for her. So he did all of that and he made him miss his appointment with a renowned masseuse from Italy.

Thus Jonathan was more than a tad upset when he got back to his apartment and he left in a huff. Though that part didn’t look like it mattered all that much to Kim. She was completely focused on her app and she didn’t actually pay attention to anything else until she started to hear things about her sister Kylie.

Kylie had come to New York with Tygga and apparently she continued to do the same there thing as she did in LA. She ditched her sisters in order to go spend time with her boyfriend. Only Khloe decided to take it up with her sister.

Khloe had tried to talk Kylie from leaving the club they were in but it did nothing. It didn’t matter to Kylie that Kourtney doesn’t get out too often or that Kourtney needs her sisters around to take her mind off her kids who were being watched by Scott. All that did matter to Kylie was what she wanted to do and that habit of hers had finally spilled over to her professional career. So Kim wanted to talk to her.

Kim has been hearing about how Kylie acts when she’s on set with photographers and people are beginning to say that Kylie is a diva. Though once that was mentioned to Kylie, she was shocked. She didn’t think she had been that bad and so she took her big sister Kim’s advice about being more professional. And she wasn’t the only one to do so.

Kourtney came to understand where Kim was coming from after she had seen a close of friend of hers who was also a designer and mother of three – Kourtney then strove to up her game. And she actually spoke at the panel for all of their apps. So New York was defiantly a worthwhile trip.

And on a side note, Kim went on to take Jonathan to lunch as an apology for her behavior earlier.