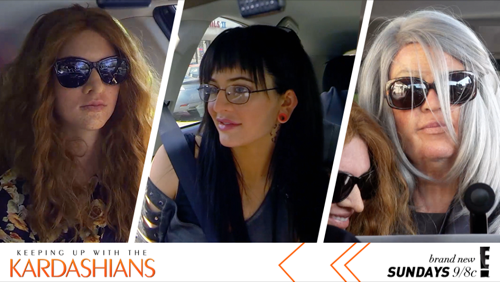 Keeping Up With The Kardashians returns tonight with an all-new Sunday, June 5, season 12 episode 5 called “Fake It ‘Til You Make It” and we have your weekly recap below. On tonight’s episode, Kendall Jenner, Kylie Jenner and Khloé Kardashian get prosthetic makeovers in hopes of having a “normal day out.”

On the last episode, Kris wanted to take back her house; she was finally fed up with having Kim and Kayne still living in her house. Did you watch last week’s episode? If you missed it, we have a full and detailed recap right here for you.

On tonight’s episode per the E! synopsis “Kendall, Kylie and Khloé get prosthetic makeovers in hopes of having a “normal day out”; Scott feels insecure about his place in the family; Kris resists Corey’s idea of fun.”

On this weeks episode of Keeping Up With The Kardashians Caitlyn goes to visit Kim at her new house. She tells Kim “The reason that I came over was because I saw something and thought of you.” They go outside and there is a statue of a butt in the driveway. Kim loves the statue.

Kris and Kendall are in Rome for a store opening. Kris is excited to meet Carl Lagerfeld, a designer for Fendi and Chanel. She says “I have been obsessed with Carl’s work and never thought I would own anything so beautiful. Now here I am sitting with him.” Kendall and her mom go out for the day in Rome and are accosted by the paparazzi. Kris says “Don’t let it bother you.” Kendall still gets upset.

Khloe meets up with Scott and asks him where he was during Kanye’s fashion show. Scott tells her “I didn’t want to stand there in the crowd like a tag along. I feel like I am chasing my old family.” Khloe says “I feel bad for Scott, but he has been apart of this family for ten years and no matter what happens between him and Kourtney he is part of this family and I want him to know that.”

Khloe meets up with Kourtney and during their workout they talk about the situation with Scott. Kourtney says “I don’t know what the deal is with Scott and I. ” Khloe tells her “I want to include Scott, but I don’t want you to be uncomfortable.”

The family gathers together to celebrate Robert Kardashian’s birthday. They are enjoying an Armanian dinner from Robert’s favorite restaurant along with family friends Tim and Sheila. Khloe has invited Scott to the celebration so that he “Feels like he is still part of the family and is included in family moments.” Scott and Kourtney are seated next to each other. There is a definite tension in the room. Kim jokingly tells Lamar “If you had not pulled through your little thing we would be doing this with Lobster so thank you for saving us from that.” Everyone laughs. .Khloe asks Scott how his new house was coming along. Scott tells her “Fine.” Then he gets up and leaves the table. Later he and Lamar are talking and he tells Lamar “I

Kylie and Khloe are talking and Khloe tells her “I wish I could just go out and be a normal person. I went out with Kendall and felt completely overwhelmed.” Khloe mentions a guy that she knows who does prosthetics for movies and can make someone look completely different. Kylie is excited about the idea of being able to go out and do one of the Hollywood tours. Khloe laughs and tells her “You are the Hollywood tour.” Kylie says “I know, but I wonder what they say about us.”

Kourtney and Khloe are talking about the dinner. Khloe says “This is what I dislike about Scott. He is so negative and depressing. It’s like he’s not even trying to make an effort to fit in with us. He always talks about not having any family or any siblings, but he does. He still has us.” Kourtney agrees with her.

Corey and Kris go to lunch with Kris’ mom. Corey tells her “I want to take Kris skating.” Her mom assumes he means ice skating, but he tells her “No, I want to go roller skating.” She asks him how is that romantic?” He tells her “It will get me to the next level of romance.” Kris is apprehensive about going roller skating because of the knee surgery she had years ago. She is worried that she will reinjure her knee.

The girls are having their face molds made so that they can go out and just be normal. Khloe says “The only way that Kendall and Kylie are going to be able to experience a normal day is to pretend to be someone else.”

Later Khloe meets up with Scott and tells him “I felt like someone held a gun to your head to be at the dinner. We want you around and we want you to be part of things. If you want to live your own life that’s ok too though.” Scott tells her “Absolutely not. I think that it is just hard being around all of you because it is like culture shock.” Khloe tells him “We get that you have that feeling. We still want you around and we are still your friend.” Scott tells her “I got a house in the neighborhood to be close to your mom and the kids so I still want to be a part of things.” Khloe tells him “I’m proud of you.”

The girls go to finish their transformation finished. Khloe says “I was under the impression that we were all getting complete transformations. I got a whole new look and Kylie and Kendall have fake noses and fake ears.”

Kim, Kris, and Corey are hanging out. Kim tells Kris “I heard that you didn’t want to go roller skating.” Kris tells her “I have had Knee surgery, I’m sixty years old and I’m a grandma. I don’t think I should be roller skating.” Corey tells her “You know how to ski and do all of these other activities. Roller Skating will be easy.” Kris does not agree. Corey tells her “I am going to get you brand new, top of the line speed skates. You’ll see it will be great.” Kim says “Mom and Corey’s relationship is definitely 90 percent what my mom wants to do and she doesn’t really bend and do what Corey wants to do.” Eventually, Corey and Kim wear Kris down and she agrees to go.

Khloe, Kylie and Kendall head out on their adventure. They call Corey and he has no idea that it is the three of them. They head over to do the Hollywood tour. Khloe says “I’m scared that the paparazzi will recognize us.” While they are on the tour they notice that the paparazzi has spotted them. Kylie says “There’s the paparazzi.” Kendall asks her where and she points them out. Kylie says “This was an epic fail. I want to go home.” Khloe is also disappointed. She says “We sat in the makeup chair for hours and the paparazzi still found us. I am so disappointed.”

Soon they realize that the paparazzi doesn’t know who they are so they decide to go ahead and go on the tour despite Kendall still being freaked out. Khloe says “As uncomfortable as we all are I know I have to make this fun for them.” The girls are having a great time on the tour. They see Sky Bar. As the tour goes on they find themselves being recognized and decide to get off the bus at the Beverly Hills Hotel because the paparazzi are not allowed there.

On the way home Khloe begins taking her costume face off. The girls are laughing and having a blast. Kylie says “I am so happy that Khloe did this with us. She made this so much fun.” When they get back they are showing the video to Scott. He tells them ” You guys don’t even look like yourselves.” Scott says “Seeing this makes me realize how much I want to be apart of all this.” They talk about the experience at Subway and Kim tells them “You have to realize that the paparazzi is everywhere.” Kylie says “After today I realized Kim is right and the paparazzi isn’t going anywhere. Being able to laugh about it makes it a bit easier.”

Kris and Corey go roller skating. Despite her nervousness, she ends up having a great time. She says “I don’t like being out of my comfort zone, but I will do whatever it takes to make Corey happy and I actually had fun.”