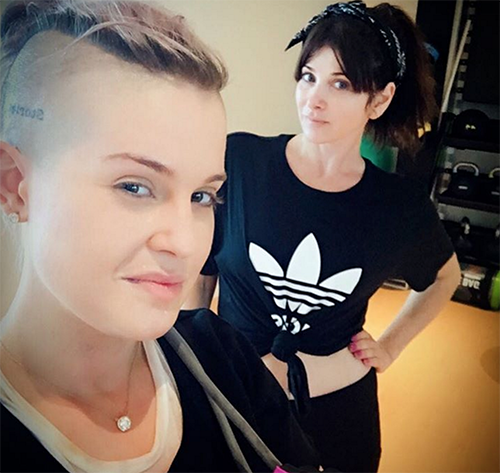 Kelly Osbourne has settled a lawsuit with the woman who allegedly had an affair with her father, Ozzy Osbourne. New reports indicate that the former reality television star settled with Michelle Pugh, who accuses her of using her Twitter account to use her as a ‘publicity stunt for financial gain’ in an amended lawsuit.

Kelly took to her Twitter account earlier this year to not only publicly shame Michelle for supposedly sleeping with her father Ozzy but to tweet out her phone number as well. In her lawsuit, Michelle says that Kelly publicly bullied her and caused ‘intentional infliction of emotional distress’ after disclosing private facts about the hairdresser. Ozzy’s cheating scandal caused him and Sharon to temporarily split before he decided to seek therapy for his supposed sex addiction.

Back in May, Kelly tweeted, “Anyone looking for cheap chunky LOW-lights a blow out and a b**wjob call…” followed by Pugh’s phone number. When her Twitter fans hit back at Kelly for the tweet, she responded hastily with, “are you in my family? NO YOU ARE NOT YOU HAVE NO IDEA WHAT SHE DID! So keep ur (sic) high-mighty opinions to yourself!” If that weren’t enough, Kelly even went as far as accusing Michelle of ‘elder abuse.’

According to People Magazine, though, Michelle and Kelly have settled their differences. Her lawyer told the publication, “The tweets have been removed and the lawsuit has been privately resolved. The resolution statement is mutual.”

There’s no denying that Ozzy’s extramarital affair was wrong, but Kelly did nothing but add more fuel to the fire by publicly bullying and tweeting out Michelle’s phone number. After all, her mother Sharon did allegedly break up Ozzy’s first marriage.

Back in 1982, Ozzy was married to Thelma Riley when he began his affair with Sharon. Sure, Kelly has every reason to be upset over her father’s cheating allegations, but when it comes to the Osbourne family, it seems like what goes around definitely comes back around.

Interestingly enough, even though Kelly had a lot to say about Michelle several months ago, she’s yet to make any statements on the situation now. Keep up with CDL for all the latest news on all of your favorite celebrities right here.

Double the pleasure but not double the fun for @whitetrashcharmsjewelry!!!@momentum_fit is kicking our butts into shape! 💪🏽😂

How am I the only person that still does not know how to use Snapchat? 😂😂😂