Khloe Kardashain Back With French Montana: Reaches Out To Former Boyfriend 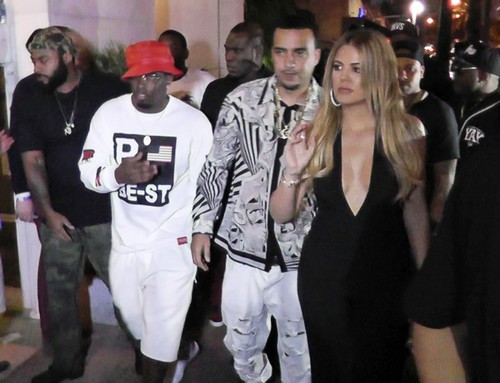 Khloe Kardashian and French Montana still sounds like a Disney show directed by Gary Busey and Mick Jagger. In fact, that whole Khloe Kardashian post-Lamar Odom drama feels like a Mexican telenovela. Therefore it’s only fitting for Khloe to rebuild the bridges over her river Kwai.

The ode to absolution kicked off when Khloe stopped by sister Kylie Jenner’s radio show to say ‘hellos’ to French. For the amnesiacs amongst you, Khloe and French Montana dated back in 2014 – he was her rebound and she was his coquettish lover.

After Lamar Odom OD’ed late last year, Khloe rushed to his bedside and helped him through the darkness. They are the quintessential star-crossed lovers with the tumultuous ebb and flow of a Shakespearian tragedy. Rumors indicated that Khloe and Lamar are back together again, which makes a small part of me extremely happy. But of course these rumors are false – Khloe is however rebounding from strip club cheater ex-bf James Harden.

French spoke out about Khloe’s love for Lamar and how much guts it took to do what she did. We were moments away from a Kumbaya musical number when Khloe shattered the mood like Robert Downey Jr circa 1990.

“I don’t f**k and duck in relationships,” said Khloe quite confidently. Kylie Jenner’s audience, which consists of three teenagers and an old serial killer in a basement, gasped and clicked their tongues. When it comes to class, Khloe is stuck somewhere in the K’s!

This Kramer vs Kramer remake ended like all love stories should – in peace and quiet with Ryan O’ Neal sobbing on your deathbed screaming, “God, why? Why?”

What do you think? Is Khloe the pick of the Kardashian litter? Does she forgive and forget that easily? Why isn’t there something amiss? Should something be amiss? Why is French Montana called French Montana? So many questions, so little time. Let us know your answers to these and other probing existential questions in the comments below.