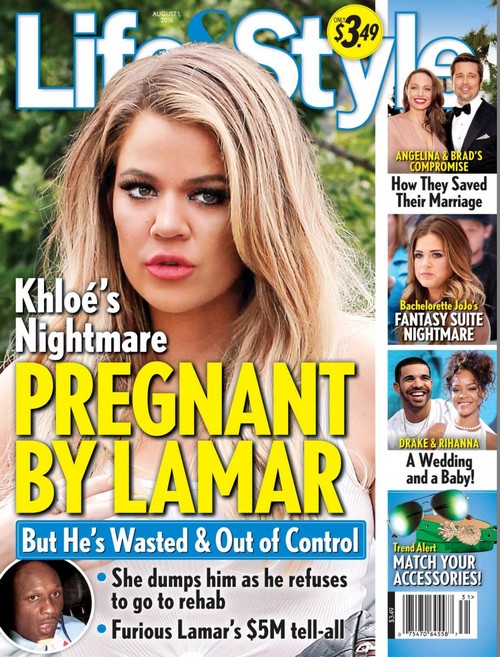 Is Khloe Kardashian finally pregnant? It’s no secret that Khloe Kardashian has struggled with fertility issues over the years, and she and her soon-to-be-ex husband Lamar Odom were trying desperately to have a baby at one point – but that was years ago. Now, Khloe is reportedly trying to get out of her marriage to Lamar (again), but will she be a single mother?

This week’s issue of Life & Style Magazine features a very irritated Khloe Kardashian and the headline reads, “Khloe’s Nightmare: Pregnant By Lamar.” The less than subtle tabloid adds, “But He’s Wasted And Out Of Control.”

The cover also teases that Khloe Kardashian gave Lamar Odom an ultimatum – she told him that if he doesn’t go to rehab and get his partying under control, she will leave him … again.

Life & Style’s inside sources claim, “There were a couple of late-night hookups. Now Khloe’s friends are buzzing that she’s pregnant, and that it’s Lamar’s.”

It’s no secret that Lamar Odom has been partying like a rockstar again, and it’s safe to assume that Khloe Kardashian is not happy about it after she nursed him back to health after his 2015 overdose. According to the report, Khloe told Lamar that if he doesn’t check in to rehab, she will divorce him, for real this time. Lamar didn’t take her ultimatum too well.

According to Life & Style, after Khloe dumped Lamar, she learned that she is finally pregnant, and it’s basically the worst timing EVER. The tabloid’s source disclosed, “She’s done with Lamar, for good. That’s why a pregnancy, which she should be overjoyed with, has become her absolute worst nightmare.”

So, do you think that Khloe Kardashian is finally pregnant? If she is going to have a baby, would she take Lamar back? Let us know what you think in the comments below!