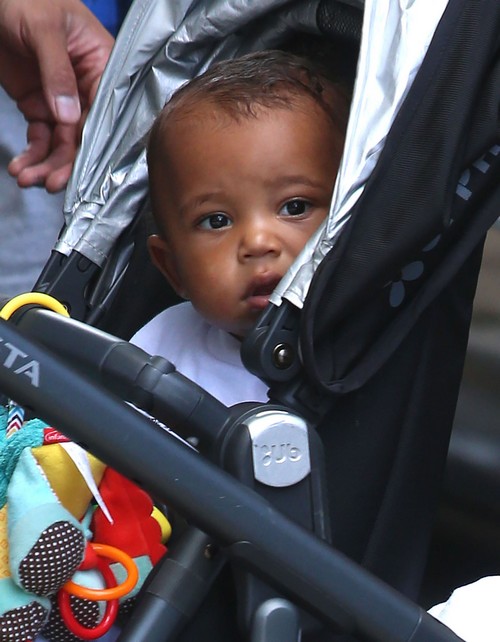 Kim Kardashian schlepped her kids North West and Saint West to New York Fashion Week to promote Kanye’s fashion line as we see in new photos. Kim Kardashian and Kanye West have officially buried the hatchet for the week so that they can shamelessly pimp out Kanye’s clothing brand all over NYC.

New York Fashion Week is upon us, and that means Kanye West and the Kardashian-Jenner clan have stormed New York City, and nearly tripped over each other trying to make sure they cross paths with every flashing camera they spot within a mile radius.

If you have followed Kim Kardashian and Kanye West’s marriage, and rumored divorce news, over the years – then you know that at the end of the day, Kanye and Kim are all about their business. The reality TV star and rapper always seem to put their marriage woes on hold for New York Fashion Week and Paris Fashion Week.

No matter how much the duo seem to hate each other at times, they smile for the cameras and rave about how much they love each other. Because one thing Kimye cares about more than their marriage – is their money.

Ironically, just last month Kim Kardashian and Kanye West had a massive blow-up and fight. And, just this week news hit the Internet that Kim Kardashian and West are also feuding over North’s education. Of course, Kim thinks that it is unnecessary, but her hubby wants their kids to have the best educations that money can buy.

Last night Kanye debuted Yeezy Season 4, and Kim Kardashian and her family were in the audience rocking out and showing their “support.” Meanwhile, North West and her baby bro Saint West are in New York City as well. Kim doesn’t actually have her children, they’re staying in NYC with their nanny, Kim Kardashian just needed them to be close on hand for photo opportunities.

North and Saint West appeared miserable as the paparazzi snapped photos of them leaving their parents’ apartments in New York City. If Kim and Kanye were going to leave the kids with a sitter all week, the least they could of done was let them be babysat in the comfort of their own home rather than bringing them to the East Coast!

Kim Kardashian and Kanye West’s children North and Saint West are seen leaving their apartment with their nanny in New York City, New York on September 7, 2016. The pair were spending the day with their nanny while their parents get ready for New York Fashion Week by FameFlynet