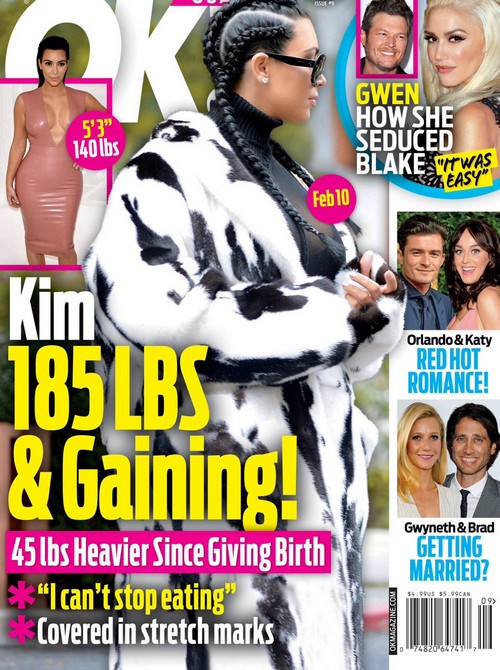 Kim Kardashian has some serious problems – not only has her husband Kanye gone over the deep end, but she reportedly weighs almost 200 pounds! Kim is having a tough time shedding the baby weight after the birth of her son Saint West, and extreme dieting doesn’t seem to be doing her any favors. The reality star was supposedly so distraught over her weight that she tried to skip New York Fashion Week – but crazy Kanye forced her to go.

This week’s edition of OK! Magazine features Kim Kardashian on the cover – sporting a head to toe fur coat that is three sizes too big on her to try and cover up her Saint West baby weight. The headline of the tabloid reads, “Kim: 185 Pounds And Gaining!” The cover goes on to tease that not only has Kim NOT lost any weight since giving birth to Saint, she actually has gained 45 pounds!

According to OK! Magazine, Kim reportedly “can’t stop eating” and has been sneaking some high calorie foods when she thinks no one is looking. An insider revealed to the tabloid that Kim was so distraught over her weight gain that she actually refused to go to New York Fashion Week – however her controlling husband Kanye West informed her staying home wasn’t an option and dragged her along to his show.

The source dished, “When she saw that her weight was still hovering near 200 pounds, she had a full-on meltdown.”

Interestingly enough, the photos that Kim has been posting on social media as of late look nothing like the real-life photos that the paparazzi have been snapping of her. Also, this would explain why Kim made things awkward last week at the Saturday Night Live episode that Kanye starred on when she flatout refused to get on stage with her husband.

What do you guys think? Will Kim be able to lose the baby weight? What is she going to do when winter is over and she can’t wear 3XL fur coats to hide her weight? Let us know what you think in the comments below!