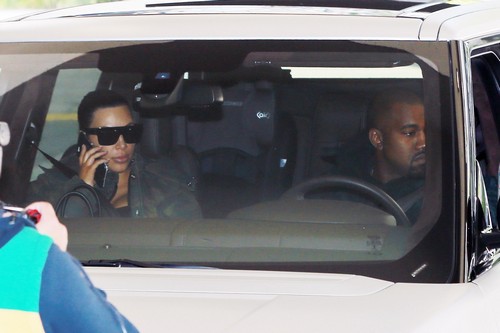 Kim Kardashian and Kanye West are getting married, again – according to reports, Kanye West is attempting to salvage the unhappy marriage and avoid divorce. Kim Kardashian is set to walk down the aisle, again?

How many times will we be forced to see Kim Kardashian as a ‘blushing bride?’ Have we not had our fill already? Well, too bad. In Touch is reporting on this terrible news and there is nothing we can do to stop it!

An insider shared with the magazine, “Kim and Kanye have been arguing non-stop for months. Things got so bad, Kanye even threatened to divorce her just days after Saint’s birth!”

Apparently Kanye West has had a change of heart and wants to try to save his marriage to Kim Kardashian. “Kanye has decided they should renew their vows to mark a fresh start,” the source revealed. Seriously? Kanye West wants to have another wedding? “He’s arranging the entire affair and is already laying down strict rules, which include no cameras or cell phones. He wants it as private and intimate as possible,” says the source.

Um, hello. Has Kanye West forgotten that his wife never sets her phone down…. nor do her siblings! The source continued, “Right now he wants to have it in California on the grounds of their HiddenHills mansion as soon as the renovations are complete, with a rustic Italia theme and just 50 of their closet friends and family members.”

Is another wedding really going to fix Kim Kardashian’s marriage to Kanye West? According to another insider, “Kim and Kanye are planning to attend marriage boot camp and have intensive therapy to get their relationship back on track.” They added, “They really do think this is going to help them get back on track. They’re hoping they can put the past few months behind them and move forward with a clean slate.”

How long will it be until we start hearing the buzz about this second wedding from Kim, Kourtney , and Khloe? Are they waiting to announce it until Kim is slimmed down to her goal weight and feeling confident again?

Perhaps Kim Kardashian’s sworn her sisters to secrecy about the wedding until she is ready to blast the news all over the internet on her own terms.

What do you guys think? Can Kanye West really save the Marriage with another wedding? Or are Kim and Kanye heading for divorce no matter how many ceremonies they go through? Sound off in the comments below and then check back here at CDL for all the latest news on Kim Kardashian and her family!