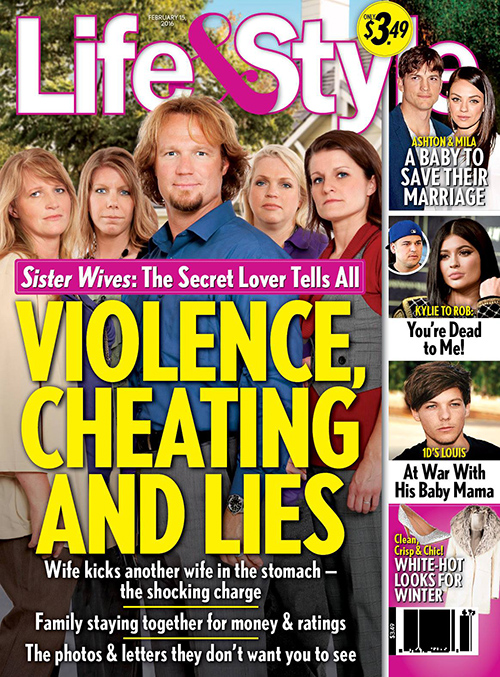 Kody Brown doesn’t seem to be satisfied with four women and could be cheating on Robyn Brown just weeks after welcoming his eighteenth child. Will more lies destroy the “Sister Wives” polygamist marriage? Are Meri Brown, Janelle Brown, and Christine Brown staying with Kody to keep the money and ratings rolling in?

The latest cover of Life & Style reveals that there may be a “Sister Wives” secret lover out there, a person who is ready to tell all about the Browns. Why would Kody need yet another woman? Does the reality television star plan on taking another wife? How many more secrets can be exposed about the Brown family?

Is anyone surprised that the Brown family would stay together for money and “Sister Wives” ratings? The Brown wives have been at war for years. Janelle Brown and Meri Brown haven’t been able to tolerate each other from day one – and both have readily admitted that time and time again.

Christine Brown has been on the outs with Kody Brown and Robyn Brown for years. Kody was courting Robyn the entire time Christine was pregnant with her sixth child, Truely, in 2010. Then the polygamist patriarch married the divorced mother of three just one month after little Truely entered the world. You can understand why Christine would be jealous and harbor resentment toward Robyn.

Lies are a part of the Browns’ lifestyle – you can’t be a polygamist without being deceptive. Allegedly, the Brown women have now added violence to the list of secrets they are keeping. A source divulged that one of the Brown wives was punched in the stomach by one of the “Sister Wives” co-stars.

Is it time for Meri Brown, Janelle Brown, and Christine Brown to pull the plug on their spiritual marriages to Kody Brown? It’s too late for Robyn Brown. She became Kody’s legal wife in December 2014 – and then Kody adopted Robyn’s three kids from a previous marriage.

More scandal may bring the cancellation of “Sister Wives.” Could Meri or Janelle or Christine get spin-off shows or is this family beyond saving in the court of public opinion?