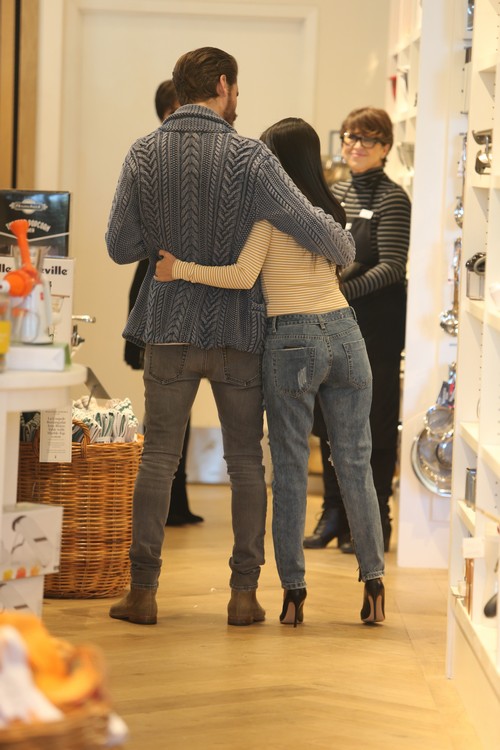 Kourtney Kardashian and Scott Disick enjoyed some PDA as they appeared to be back together as they browsed through Williams-Sonoma. However, it looked as if the ever present cameras were following the on-again-off-again couple around. Is Kris Jenner pushing Kourtney and Scott back together for “Keeping Up with the Kardashian” ratings?

Photos of Scott Disick and Kourtney Kardashian wandering around the store in Calabasas certainly make it appear as if they were a couple in love. TMZ reports that the “Keeping Up with the Kardashians” cameras were rolling. Don’t jump to conclusions about Scott and Kourtney reconciling just yet.

Scott did purchase a house not far from Kourtney’s home recently. Maybe the duo was just out shopping for stuff to fill up Scott’s kitchen. Maybe Kourtney was helping Scott pick out a blender or two? One for margaritas and one for smoothies or protein drinks?

Would Kourtney really take Scott back? After everything Scott Disick has put Kourtney Kardashian through – the drinking the partying, the stints in rehab, the alleged cheating? Kourtney hasn’t even tried to find a decent guy since the latest split from Scott. Nah, Kardashian allegedly hooked-up with Justin Bieber – like that was going to last.

Kris Jenner just might be working overtime to deflect attention from the current situation going on with Rob Kardashian and Blac Chyna. Throwing Scott and Kourtney together, making it look as if a reunion is taking place or the possibility of a reunion would push Rob and Chyna out of the headlines, right?

Are the Kardashians pulling out all the stops to grab ratings for “Keeping Up with the Kardashians”? We wouldn’t put it past Kris Jenner to manipulate anything for ratings. And let’s face it, Kourtney Kardashian and Scott Disick would be complete nobodies if it weren’t for the Kardashian empire of reality shows, clothing lines, apps and whatever else will make them a quick buck.

Hey, maybe Scott and Kourtney really are back together. Stranger things have happened. Like Kim Kardashian and Amber Rose making nice and ending their feud.

‘Keeping Up With The Kardashians’ cast film at William Sonoma in Calabasas, California on February 2, 2016. Scott Disick, Kris Jenner, and Kourtney Kardashian browse through the shop. FameFlynet