Kris Jenner Digs Up Details On Her Affair With O.J. Simpson To Bolster KUWTK Ratings? 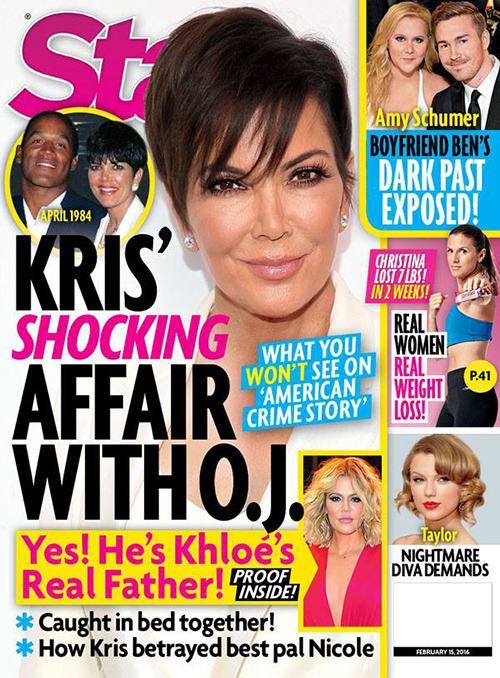 Claims that Kris Jenner and O.J. Simpson engaged in an illicit affair have resurfaced. The reports that O.J. is Khloe Kardashian’s biological father have also come back. Is Jenner trying to make a grab for higher “Keeping Up with the Kardashians” ratings?

Questions about Khloe’s paternity are nothing new. There have been stories repeated for a few years that an allegedly adulterous Kris and O.J. betrayed their respective spouses Robert Kardashian and Nicole Brown Simpson. But the adultery and betrayal are only part of the suppositions.

Poor Khloe has been the center of the “who’s your daddy” question for quite some time. Insiders have previously claimed that Robert Kardashian knew Khloe wasn’t his biological daughter but never asked for a DNA test as proof positive.

The current cover of Star claims that Kris and O.J. were caught in bed together. The magazine cover also proclaims that all the proof needed to show that Khloe is the Football Hall of Famer’s daddy is in that issue!

Why drag all this up again now? Probably because the FX docudrama “The People v O.J. Simpson: American Crime Story” has tongues wagging again. Is Jenner trying to cash in on this horrible tragedy? Is it possible that the momager would sink to an all-time low and exploit not only Khloe but her brutally murdered supposed best friend Nicole Brown Simpson?

There are very few people who buy the theory that Khloe Kardashian is O.J.’s daughter. There has been conjecture over whether or not Kris cheated on then husband Robert, but no solid proof has ever been offered.

While Kris Jenner has coyly danced around the issue of marital fidelity, she ultimately denied any extramarital affairs while married to Robert Kardashian or Bruce Jenner – now Caitlyn Jenner.

Khloe Kardashian can’t possibly be O.J. Simpson’s daughter, can she? Is Kris Jenner dragging up these old allegations to score ratings for “Keeping Up with the Kardashians”? If so, that’s as low as you can possibly sink, don’t you think?