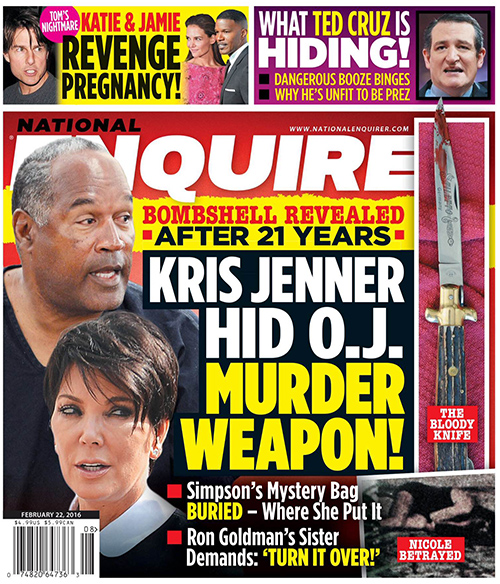 Robert Kardashian may have used Kris Jenner to hide evidence that would have proven O.J. Simpson murdered ex-wife Nicole Brown Simpson. Reportedly, Robert asked Kris to hang onto a briefcase for him after the brutal murders. National Enquirer spoke with a well-placed source who revealed that Robert Kardashian handed off a Louis Vuitton bag to Kris following the slaying of Nicole Brown Simpson and Ronald Goldman.

The satchel allegedly contained the six-inch knife O.J. Simpson used to brutally murder his ex-wife and Goldman. The case long ago went missing and Kris probably never even knew what was in it, insiders reveal.

Ron’s sister Kim Goldman also spoke with National Enquirer and divulged that the Goldman family was contacted regarding the missing satchel. “We were notified by either a lawyer or someone from the Kardashian family. Robert wanted the bag to be given to me after his death.” Kardashian died in 2003 after a battle with esophageal cancer.

Kim Goldman divulged that Kardashian “instructed his heirs to turn over O.J.’s mysterious bag to Ron’s family in the event of his death.” The briefcase has never surfaced and the Goldman family has no idea of the contents.

What happened to the briefcase, which Robert had put in a larger bag at some point? Simpson’s former manager spoke with NE and stated the bag was probably stolen – pointing out that there have been a few attempted burglaries at the homes of Kris Jenner, Khloe Kardashian, and Kourtney Kardashian.

Did Robert Kardashian knowingly hide the knife that would have proven O.J. Simpson guilty of murdering Nicole Brown Simpson and Ronald Goldman? Was Kris Jenner unwittingly involved in concealing the evidence?

Did someone steal the bag from Jenner’s home after Robert died in order to keep the Goldman family from receiving the briefcase full of incriminating proof of the crime?

Neither the public nor the Goldman and Brown families will ever know unless that Louis Vuitton bag and/or briefcase ever surfaces.