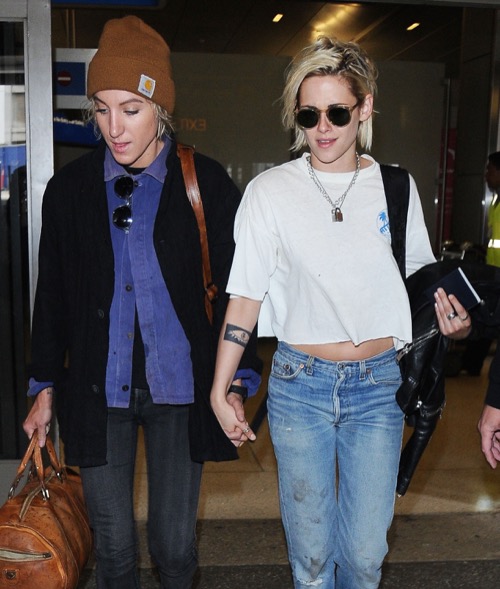 Could there be wedding bells in the near future for Kristen Stewart and girlfriend Alicia Cargile? Everyone thinks Kristen is ready to marry Alicia Cargile ever since Father’s Day when Kristen took Alicia home to meet her dad John. Rumors are building that Alicia may be the one to snag K-Stew in marriage.

Kristen and Alicia split in October 2015 and Kristen moved on with Stephanie ‘Soko’ Sokolinski. In May 5, 2016 Kristen was spotted getting cozy with Victoria’s Secret model Stella Maxwell at a Met Gala after-party. The next day Soko used social media to confirm her split from Kristen.

If Kristen was cheating on Soko with Stella Maxwell it ended quickly because Kristen and Alicia were at the Cannes Film Festival walking the red carpet just days later.

Still together about a month since Cannes, Kristen took Alicia home to Studio City, California on Father’s Day to meet her father John.

Alicia needs to be careful because Kristen has already dumped her once. Kristen cheated on Robert Pattinson with a very married ‘Snow White and the Huntsman’ director Rupert Sanders. Even sadder Kristen refused to acknowledge she was dating Robert until the affair with Rupert was exposed.

When Kristen Stewart started dating her personal assistant Alicia Cargile she refused to publicly acknowledge that relationship also. Who wants to be someone’s dirty little secret? Alicia splitting from Kristen was probably the best thing that could have happened.

Soko was the next gal pal to come into Kristen’s life – and Kristen cheated on Soko too. Face it, Kristen Stewart is a cheater.

Introducing your significant other to your parents is a pretty big step in a relationship – it usually means you’re on the marriage track.

Will Kristen and Alicia get married in a secret ceremony? It wouldn’t surprise us if the couple eloped because Kristen is fond of keeping secrets when it comes to relationships.

If Kristen Stewart and Alicia Cargile do get married we wish the ladies all the best. But beware Alicia, Kristen has a history of cheating and as the saying goes once a cheater always a cheater.

Has Alicia succeeded where Robert Pattinson and Soko couldn’t? Has Alicia managed to tame Kristen into monogamy?