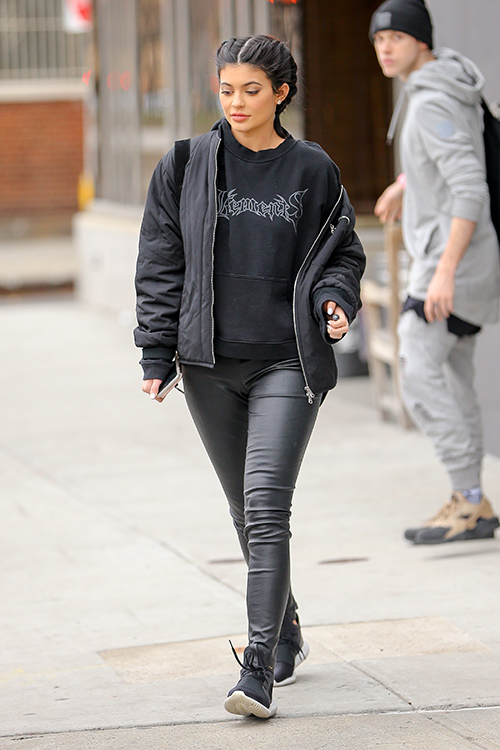 Kylie Jenner just signed a Puma contract despite Kanye West saying she would never model for a clothing line apart from Yeezy. Kylie has clearly given her brother-in-law a major shocker. In an official release cited by ET, Global Director of Brand and Marketing at Puma, Adam Petrick, said, “I am pleased and excited to be able to confirm that PUMA is indeed working with Kylie Jenner.”

He went onto state that the model represents a “…fresh and exciting new era for fashion…” Puma wanted a female to headline their campaign who already had a large following and, by extension, a huge amount of social influence. She will head the company’s Spring/Summer campaign for women’s training wear. This is slated to begin April 2016.

The Daily Mail reports that Kylie Jenner secretly signed the deal with Puma, indicating she suspected her brother-in-law would have issue with the contract. Clearly, Kanye was not in the loop! Back on Tuesday, February 9, he erupted on Twitter in his customary confident manner that “1000% there will never be a Kylie Puma anything. That’s on my family! 1000% Kylie is on Yeezy team!” Kanye West was adamant that no member of the Kardashian/Jenner clan would model for any other clothing line.

Initially, Kanye West admitted that he took the news of his 18-year-old sister in law signing the deal as a slight against himself and his clothing line. However, in a comment to TMZ, he holds that he has gotten over that initial disappointment. It begs the question…will this adversely affect his already shaky financial situation?

This move should not have come as a complete surprise, as Kylie has been seen wearing Puma apparel in the past. Additionally, with Kylie Jenner noticeably absent from the Yeezy Season 3 runway at the recently held New York Fashion Week, one has to wonder at Kanye’s confidence in Kylie’s support.

Kylie Jenner spoke to ET regarding making more confident strides in her career and spoke of the advice received from her mother, Kris Jenner. Her mother encouraged her and her sisters to aspire to be great businesswomen while doing what they love. These inspiring words from Kris Jenner appear to have had a pivotal effect on the moves Kylie’s currently taking.

Is Kanye really happy that Kylie would now be leading the Puma campaign? Or is he just accepting that his influence does not encompass the younger Kardashian/Jenner family?