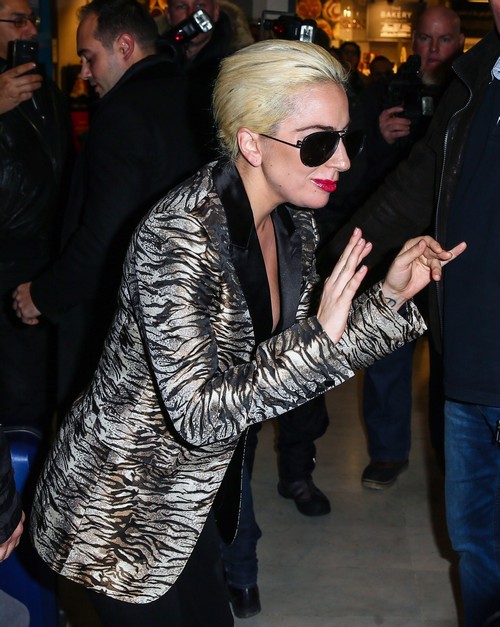 Lady Gaga decided to shade Taylor Kinney when she sat down with CBS Sunday Morning to talk about her new album ‘Joanne.’ Of course Gaga became emotional when talking about the inspiration behind the song even though she never knew it’s subject, her dad’s late sister. Gaga also discussed ending her engagement to actor Taylor Kinney earlier this year, mentioning that her love was not met with enough dignity.

During the making of her fifth album Lady Gaga admits that there was, “A lot of crying, a lot of pain, a lot of learning about myself.” The title song was written about her father’s sister Joanne who passed away at the age of 19 from Lupus. The song is a touching tribute to an aunt who died before the singer was born.

Another song, ‘Million Reasons,’ is also deeply personal. It tells the story of the heartache of relationships. When discussing the single Lady Gaga opened up about the end of her five-year relationship with Taylor Kinney.

“I think women love very hard. We just love with everything we have. And sometimes I don’t know if that love is met the type of dignity we wish it would be met with,” Lady Gaga explained to interviewer Lee Cowan. So why is Lady Gaga shading her ex-fiance Taylor Kinney?

In September 2016 Lady Gaga talked with SiriusXM host Andy Cohen about another song on the album, ‘Perfect Illusion.’ The lyric ‘It wasn’t love, it wasn’t love, it was a perfect illusion” was not meant as a hit against Taylor Swift, Lady Gaga explained. The single is about feelings everyone has had in relationships.

Many critics believed that the pop diva’s change in the direction of her music would alienate fans. That isn’t the case. ‘Joanne’ has given Lady Gaga her fourth number one album. Through all the awards and number one hits Gaga appears to remain down-to-earth and humble.

During the CBS Sunday Moring interview a tearful Lady Gaga admits she misses meeting regular people and having ordinary conversations about life. The only place the real Stefani Germanotta can be herself is inside her own heart. Once she steps across what she calls the property line Lady Gaga understands that there is no privacy.

Lady Gaga will perform during halftime at Super Bowl LI on Sunday, February 5, 2017 in Houston at the NRG Stadium. Lady Gaga is also on tour to promote ‘Joanne.’ What did you think of Gaga slamming ex-finace Taylor Kinney? Is Gaga going Taylor Swift?

Lady Gaga arrives at the Paris Charles-de-Gaulle airport in Roissy to go to Paris. She was traveling for the Victoria’s Secret show in Roissy, France on November 27, 2016. She greeted many fans and stopped to sign a lot of autographs many of her new album ‘Joanne’. FameFlynet