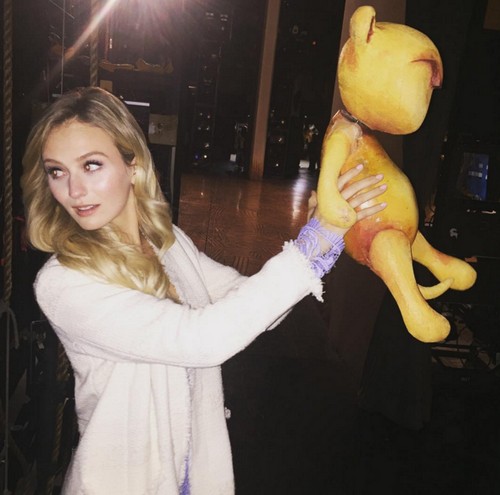 Is The Bachelor 2016 winner Lauren Bushnell pregnant with Ben Higgins’ baby? The Season 20 finale of The Bachelor just aired on ABC, and Ben Higgins gave his final rose to Lauren B. and asked her to marry him.

Generally, a newly engaged couple would be planning their wedding – but it looks like Ben and Lauren are more interested in planning a pregnancy. Could she already be pregnant?

Ben Higgins and Lauren Bushnell began their Bachelor publicity tour this week after the finale aired on ABC. And, one of their stops was Broadway’s “The Lion King” on March 17. After the show Ben and Lauren headed backstage, and Ben shared a bizarre picture on Instagram of Lauren holding up baby Simba.

Okay, maybe the photo wasn’t that bizarre, but his caption definitely piqued his fans’ interest. Ben captioned the photo, “My girl practicing for parenting.”

Obviously, Instagram went wild – did Ben Higgins just announce that he and Lauren had a baby on the way. Or was it just wishful thinking? Ben is a super traditional guy, the odds of him and Lauren having a baby before they make it down the aisle are pretty slim.

We’re talking about the same guy that asked for her father’s permission to propose to her. If anything, it sounds more like Ben is just trying to extend his fifteen minutes of fame by stirring up some pregnancy rumors.

It is a little strange that he is focused on babies, when he and Lauren Bushnell haven’t even set a wedding date and refused to get married during the finale.

What do you think Bachelor fans? Could the Season 20 winner Lauren Higgins already be pregnant with baby number one? Or is Ben just trying to keep him and his bride to be in the headlines by creating pregnancy rumors?

Let us know what you think in the comments below and don’t forget to check CDL for all of your Bachelor spoilers and news!