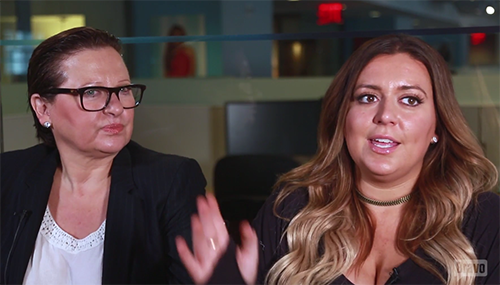 The official announcement that Lauren and Vito are expecting came through a joint statement made to People. Showing off her baby bump, Lauren revealed that the bundle of joy is due in early 2017. Vito and Lauren have been “trying to get pregnant for a while.” The mom-to-be revealed that “as soon as we stopped placing so much pressure on ourselves it actually happened.”

The Manzo family definitely needed some good news after Caroline Manzo’s cancer scare. In April, the reality television star found an extremely painful lump in her chest, who was already dealing with a broken foot. Caroline revealed to Bravo Daily Dish, “It was a terrifying few months that made me think, “I’m too frickin’ young to die.”

Caroline lived in fear from April until July when the doctors finally were able to figure out what was wrong. The ‘Manzo’d with Children’ star says, “It was a crazy infection that pretty much stumped the doctors.”

Lauren spoke with Bravo Daily Dish and revealed that Caroline is in charge of decorating the nursery. Apparently, Lauren is much too indecisive and not at all good with decorating. So, Grandma Caroline will take care of all that.

Caroline’s sister-in-law, ‘The Real Housewives of New Jersey’ star Jaqueline Laurita, recently became a grandmother. Jaqueline’s daughter Ashlee Holmes gave birth to a baby boy – Cameron Hendrix Malleo. It won’t be long before little Cameron will have a little cousin as a playmate.

Season three of ‘Manzo’d with Children’ airs Sunday nights at 9 p.m. ET on Bravo. Caroline Manzo decided to share her cancer scare with viewers, but it is unknown whether Lauren Manzo and Vito Scalia will share their baby news during the show’s third season.