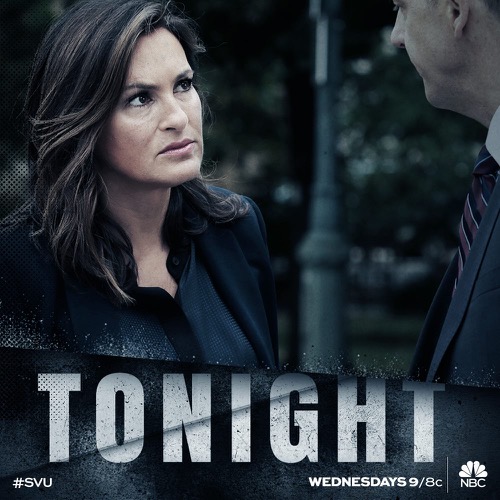 Did you watch the season 18 episode 4 Law & Order where an athlete was the victim of sexual assault, but her secret double life could have ruined both the case against her attacker and her Olympic future? If you missed it we have a full and detailed Law & Order SVU recap, right here.

On tonight’s Law & Order Season 18 episode 2 as per the NBC synopsis, “A sergeant (Edwards) makes Benson (Mariska Hargitay) choose between loyalty and duty when his son is accused of rape.”

Tonight’s episode of Law & Order SVU kicks off with Ellis returning home to his parents’ house on Halloween weekend – he surprises them with flowers and champagne and then he announces that he got a promotion at work. After the dinner Ellis heads to a wild Halloween party – the drinks are flowing and the costumes are crazy.

Ellis hits on a girl named Janie at the party, after a few drinks Ellis heads to the bathroom and finds Janie in there vomiting in the sink. She asks him to step outside with her.

A few minutes later the NYPD is called to the nearby park – Janie is passed out in the yard. Someone called the police and said that Ellis was raping her in the park. Ellis is handcuffed and taken in to SVU. Ellis insists that it is all a big misunderstanding, but it doesn’t look good for him, photos of Janie lying in the yard have already gone viral on social media.

In the interrogation room, Ellis explains to Carrisi that he was having sex with Janie and it was consensual – whoever called the police misunderstood what was happening. Ellis says they went outside after midnight and walked to the park. Olivia gets a phone call, Janie woke up in the hospital, she heads to check on her.

Meanwhile, in the other room, the man that found them in the park is talking to Fin. He says that he found Ellis in the park, he was on top of Janie and was having sex with her, and she was passed out and unconscious.

In the hospital, Janie has no recollection of going to the park and has no idea who Ellis is. She doesn’t even remember leaving the party with him. Janie starts crying because she realizes that she had sex with someone last night. Janie’s cousin barges in to the hospital room, with her phone, she’s shouting that Janie was raped – and there are photos of it all over the internet. Janie consents to Rollins’ ordering a rape kit.

It turns out that Ellis’ father is a cop from Nassau County, he shows up to the police station and shuts down Carrisi’s interview with Ellis. Olivia is shocked when she meets Ellis’ father Patrick Griffin – they know each other, he was her very first partner when she joined the police dept. Patrick takes Ellis home and says he won’t be answering any more questions.

At the hospital, Janie picks Ellis out of a line-up and confirms he is the one that raped her. Things take a turn, and Janie reveals that her cousin Leah used to date Ellis. The team hits the streets and interviews people that were at the party – they all have different stories, some of them say that Janie was all over Ellis, and other people insist that Janie was too drunk to consent.

Olivia calls Ellis and his father in to the police station, she explains that she is going to have to arrest him for rape. Olivia lets Ellis go home to say goodbye to his mother, Patrick promises that he will be back at the police station at AM. Patrick pleads with Olivia to “make the case go away.” She says that there is nothing that they can do.

Rollins and Olivia sit down with Janie, she’s furious about all of the press and is embarrassed by what they are saying about her online. Janie doesn’t want to go to trial, Barba and Olivia sit down with Ellis and offer him a deal. He pleads guilty to a class E felony and 10 years probation to avoid jail time. As part of his plea deal, he agrees to publicly apologize to Janie.

Ellis stands up in court – he starts to read his apology statement, then he freaks out and says that he refuses to plead guilty and apologize to something that he didn’t do. Everyone is shocked when Ellis pleads not guilty, including his own lawyer. After court Olivia tries to talk some sense in to Ellis’ father Patrick and warns him that Ellis doesn’t stand a chance going to trial – but Patrick doesn’t want to hear it.

Ellis trial kicks off – the eye witness that found him in the park with Janie takes the stand and describes how he found Ellis having sex with a girl while she was passed out in the park. Janie takes the stand and Ellis’ lawyer points out that Janie called her cousin Leah at 12:30 and leaving her a voicemail, he plays the voicemail for the jury. Ellis’ lawyer approaches the judge after court and wants to add another witness to the list named Diego Perez – apparently he was in the park the night Ellis and Janie were too.

That night Olivia pays Patrick a visit, she did some digging on the witness and is certain that Patrick paid him to testify on Ellis’s behalf. Patrick denies it, he insists he’s not responsible for witness tampering and pleads with Olivia to stop trying to ruin his son’s life.

Diego takes the stand in court the next day, he says that he was walking through the park and saw Ellis and Janie having sex. Diego insists that Janie was wide awake and she was “really in to it.” Barba points out that Diego was a confidential informant and worked with the cops at Patrick’s job. Diego lies on the stand and says that he never met Patrick Griffin before.

Ellis jumps up and starts screaming that Diego is lying – he breaks down in tears and cries that he is sorry and confesses to raping Janie. Ellis admits that he knew she was passed out. The judge accepts Ellis’ guilty plea, and she sentenced him to 2 years in prison.

After court, Olivia tries to talk to Patrick outside – she isn’t going to arrest him for witness tampering, they decided not to press charges. Patrick explains that he was trying to save his son, and create reasonable doubt for the jury. Patrick rants that the system is rigged against Ellis, and the public wanted Ellis’ head on a platter. Olivia tells Patrick that the only thing he can do now is be there for his son for the next 2 years.