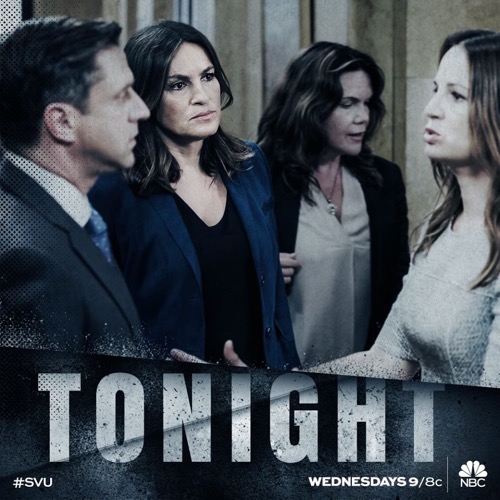 Did you watch the season 18 episode 2 Law & Order where after 16 years in prison, a convicted rapist (guest star Henry Thomas) is exonerated due to newly tested DNA evidence? If you missed it we have a full and detailed Law & Order SVU recap, right here.

On tonight’s Law & Order Season 18 episode 2 as per the NBC synopsis, “A man (Langham) tears a family apart when he uses a prominent fake identity to lure a vulnerable wife and mother into his bed. Barba (Ra�l Esparza) argues that the evidence amounts to rape, but he’s faced with a powerful defense attorney (Thorne) and a skeptical judge (guest star Vincent Curatola) in court.”

Tonight’s episode of Law & Order SVU kicks off with Laura sending her son and husband to Boston – as soon as they are out the door, she gets a phone call and agrees to meet someone at a hotel. Later that night, she meets up with a guy – right before they have sex, he asks if she is sure she wants to, Laura is all for it. The next morning, a hotel employee finds Laura in the bath tub and calls 911, it looks like she tried to commit suicide.

Rollins and Carisi head to the hotel room to investigate. It’s obvious that she had a visitor the night before. Something is not right. Finn goes through Laura’s phone, at 9:56 PM she texted someone and told them that she had the “Best sex ever.” Then, 10 minutes later she texted them and said, “You raped me burn in hell.” The texts went to a burner phone and they have no idea who the phone belonged to.

At the hospital, Carisi and Rollins track down Laura’s husband – he is totally shocked, and doesn’t even know why his wife was at a hotel. Laura is still unconscious, her husband agrees to let them do a rape kit on her.

Meanwhile, Olivia gets an upsetting phone call from her babysitter Lucy. Apparently, they think her son Noah is underdeveloped and has poor language skills.

Finn is going through Laura’s phone and finds something interesting. Her son Justin sent her a message the night that she overdosed and said that she “makes him sick and he hopes she dies.” Carisi sits down with Justin, he explains that the reason he sent that message was because Laura was going crazy about college and going out on lunch dates with someone from Hudson University to try and get Justin in.

CArisi and Rollins learn that the man that signed in to the hotel was named Alden Kessler, and sure enough he is the Dean of Admissions at Hudson University. They head down to Hudson and are shocked when they meet Alden Kessler, and realize he is black. The man that was with Laura at the hotel was white. Apparently, he was pretending to be the Dean of Admissions so that Laura would sleep with him. That would explain why she thought that he raped her.

Laura finally wakes up at the hospital and Olivia pays her a visit – she explains that she met the man she slept with on campus and he introduced himself as Alden Kessler. They went on a few dates and the she had sex with him because she was trying to get Justin in to Hudson. After they had sex, Laura googled Alden Kessler and realized that she had been played, so she texted him and accused him of raping her. She wasn’t trying to commit suicide, she was just trying to numb the pain. Olivia is moved by her story – and she thinks that they have a rape case.

Olivia heads back to the office and tells her team to find the impostor ASAP. They think that he must be someone who works at the campus, and close to the real Alden Kessler. Rollins and Carisi head back to the campus to snoop around. Someone recognizes a photo of the imposter, his now is Tom Metcalf, and he is the head of campus security. They learn he punched out of work and headed to a nearby bar.

Rollins and Carisi head to the bar, and they catch Tom red-handed with someone’s mother pretending to be Alden Kessler…again. Rollins flashes her badge and takes Tom down to the precinct to have a chat with him.

Tom doesn’t deny the fact that he lied to Laura, but he says that it is not illegal. He even brags about impostering other people before, even doctors, he’s even writing a book about it.
Catching Tom was only half the battle, now they have to prove that he committed a law. Barba is not on board, he says that there is no law in New York about fraudulent rape.

Rollins and Carisi get a warrant for Tom’s apartment – they learn that he has been sleeping with multiple women and pretending that he is the dean of admissions. None of them want to testify and go public though. Luckily, Tom screwed up, he has been video taping all of the women without their permission when he sleeps with them. It’s enough for Barba to tell Olivia that she can go pick Tom up.

Of course, Tom is not too thrilled about being brought down to the precinct. Barba tries to get him to cop a plea for sexual assault – but he refuses. So, Olivia arrests him and reads him his rights.

The next day they head to the motions at court – Tom’s lawyer argues that the video tape shouldn’t be admissible since the other women aren’t pressing charges. The judge orders that they can only use the footage of Laura, not the other women.

Barba heads back to court and argues his case. The judge is not on Barba’s side, and Tom’s lawyer is making a mockery of the case and pointing out how ridiculous it is to call her client a rapist. The case goes from bad to worse, apparently the defense found a doorman at the hotel who takes the stand and says that he overheard Laura calling Tom by his real name – so it’s obvious she knew who he really was before he had sex with her.

Carisi and Finn meet with the doorman and convince him not to take the stand and purger himself and lie for Tom. They meet in the judges’ chambers and cut a deal – all Tom is getting charged with is a misdemeanor impersonation charge.

Olivia heads to Laura’s house to tell her the bad news, when she arrives – there are dozens of cops there. Someone committed suicide. It wasn’t Laura though, it was her teenage son Justin. A horrified Olivia sees Jason’s body lying on the ground and consoles his mother.