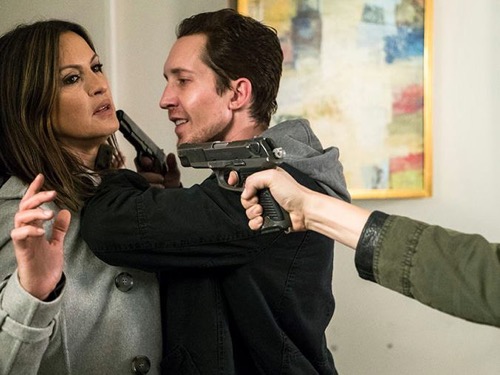 Tonight on NBC Emmy Award-winning producer Dick Wolf’s crime drama, Law & Order: SVU airs with an all Wednesday January 13, season 17 episode 11 called, “Townhouse Incident,” and we have our recap below. On tonight’s episode, a home invasion turns violent and Benson (Mariska Hargitay) tries to halt it, but she gets taken hostage instead.

On the last episode, a high school student planned a clandestine hookup with his female teacher but ended up in a far more sinister situation. Starring Mariska Hargitay, Ice T, Kelli Giddish and Peter Scanavino. Did you watch the last episode? If you missed it, we have a full and detailed recap right here for you.

Tonight’s season 17 episode 11 looks like it is going to be great and you won’t want to miss it, so be sure to tune in for our live coverage of NBC’s Law & Order: SVU at 9:00 PM EST! While you wait for our recap hit the comments and let us know how excited you are about the new season?

Tonight’s episode of Law & Order SVU kicks off with a teen girl named Lucy – she stops by a house to walk a little boy named Luca to school. His mother answers the door and says that he is sick and slams the door in her face – her husband is yelling in the background. Lucy arrives at Olivia’s house – she is also Noah’s babysitter. Lucy tells Olivia that she thinks something bad was happening at Lisa’s house.

Olivia heads over to the Carabella house and Lisa answers the door – she tries to send Olivia away, but she insists on coming inside. As soon as Lisa opens the door for her, a man with a gun grabs Olivia and holds the gun up to her head. Inside the house there is another woman with a gun, she grabs Lisa. It looks like Olivia just accidentally walked in to a very hostile hostage situation.

Olivia introduces herself as a New York police officer – the assailant strips her of her gun and badge – there’s another guy upstairs searching the house for money, he can’t find any. The guy is named Joe and he tells his girlfriend Roxy to tie up Olivia, and then he hits her across the face with his gun. Ralph (Joe and Roxy’s accomplice) heads in to the kitchen and starts beating Lisa’s husband and demanding to know where the safe is hidden. Apparently, one of the guys used to work for the Carabella’s family at their store.

Carisi gets a phone call at the station – Dobbs is in charge because they all think that Olivia is at a conference. Carisi, Finn, and Dobbs head out on the call – a woman has reported a rape. They arrive at Stacy’s house, a guy broke in to her house and tried to rape her – but her neighbor showed up just in time. Stacy says that she scratched his face, so they are checking her fingernails for DNA.

The neighbors say that the rapist is up on the roof – he ran up there and hid. Carisi and Finn head up on the roof and find a black man hiding, they arrest him and take him in to custody. They return to the police station and learn that Olivia never showed up at the conference. Lucy shows up at the precinct freaking out – she tells them about the Carabella house.

At the Carabella house, Luca admits that they have a safety deposit box at the bank. Ralph says that he is taking her to the bank to get the contents of it. Meanwhile, Joe and Roxy take Olivia upstairs – the little boy Luca is handcuffed to the bed. Joe takes the Carabella’s teen daughter in to a closet and proceeds to beat and rape her – forcing Olivia to listen outside of the door. Luca starts screaming for help, Roxy cuts Olivia loose and tells her to keep Luca quiet. Olivia tries to convince Roxy

Finn and Carisi stop by the Carabella house – Lisa’s daughter Tess answers the door and insists that everything is fine, they can tell she is lying, but they pretend to leave the house. They call for reinforcements and the NYPD Swat team has the house surrounded. They are currently waiting for hostage negotiation to arrive, and are trying to get a visual on the gun men. Inside Ralph and Roxy are having a meltdown – Roxy is screaming at Joe to come up with a plan ASAP.

Joe makes Olivia call Dobbs outside – he requests that they disable the cameras and the snipers to stand down. Joe hangs up on Dobbs, Olivia tries to reason with him. Joe asks Olivia who really cares about her at the NYPD, he wants to talk to the person that has the “most pull.”

Captain Tucker arrives on the scene – Joe has informed the cops that he will only talk to him. Olivia reassures Tucker that everyone in the house is alive. Joe takes the phone and starts making his requests. He wants a black SUV, a million dollars in cash, the streets cleared to the nearest helicopter pad and a jet with a full tank of gas.

Meanwhile, Carisi and Finn head to the nearest bank and find Ralph with Lisa. They arrest him and take him in to custody – Barba begins questioning him. Ralph sings like a canary and says that Roxy is his sister and Joe is his boyfriend. He used to work at the Carabella store but he was fired. They needed the money, so they decided to rob the Carabella house. Lisa begs Carisi to let her go back to the house with the money.

The police tell Ralph that if he ever wants to see his sister alive – he has to call Joe and pretend that everything is okay. Ralph calls Joe, and then he ignores the police and tells them that he got arrested. Captain Tucker calls Ralph, he demands that the police hand over the cash NOW – and Ralph. Joe finally agrees to send out one of the hostages in exchange for the money that Ralph got from the bank.

Joe lets two EMT’s inside to get Luca’s husband – he’s bloody and unconscious. Next, the black SVU that Joe requested arrives outside. Joe makes Olivia put a bullet proof vest on Roxy – then he sends her out to check the car and make sure that the keys are in it. Olivia whispers to her that all she has to do when she walks outside is drop and put her hands up in the air, and the police won’t kill her. Roxy heads outside to make sure the keys are in the car. Then she does what Olivia told her to do and gets down on her knees and surrenders herself to the cops.

Inside Joe is furious that Roxy just surrendered, he blames Olivia and is certain she got inside her head. Tucker calls Joe and tells him that he can have the car – but he needs to hand over the kids. Joe agrees, he says that they can have the little boy, but he is leaving with Olivia and the teen girl Tess.

Joe marches outside with his gun to Olivia’s head, and both of the kids. While they are walking Olivia begs Joe to let the kids go – he agrees and Tess and Luca run off to the cops. Once the kids are gone, Olivia spins around knocks Joe’s gun away – then the snipers shoot and kill him. Finn announces that Joe was dead before he hit the ground. The police rush Olivia away to get her checked out by EMT’s.