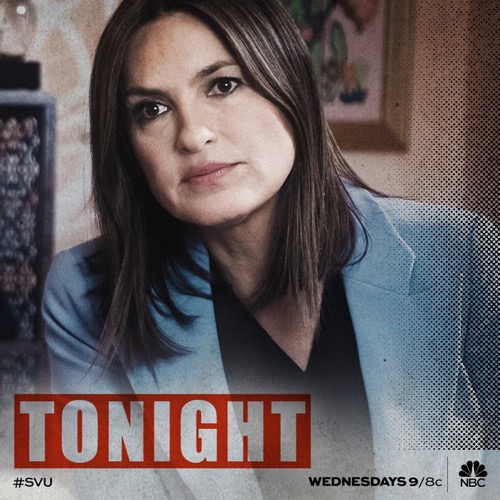 Tonight on NBC Emmy Award-winning producer Dick Wolf’s crime drama, Law & Order: SVU airs with an all Wednesday January 6, season 17 winter premiere called, “Catfishing Teacher.” On tonight’s episode, a rendezvous with a teacher is planned by a high-school student, but the situation turns much more dangerous for the teen.

On the last episode, a child abductor’s trial got complicated when a plea deal was rejected, so Barba was forced to use evidence that was decades old, leading to a confrontation between him and former SVU colleague Dr. Huang. Did you watch the last episode? If you missed it, we have a full and detailed recap right here for you.

On tonight’s episode as per the NBC synopsis “a high school student plans a clandestine hookup with his female teacher but ends up in a far more sinister situation. Starring Mariska Hargitay, Ice T, Kelli Giddish and Peter Scanavino.”

Tonight’s season 17 episode 10 looks like it is going to be great and you won’t want to miss it, so be sure to tune in for our live coverage of NBC’s Law & Order: SVU at 9:00 PM EST! While you wait for our recap hit the comments and let us know how excited you are about the new season?

Tonight’s episode of Law & Order SVU kicks off with Carisi metting up with Rollins for coffee – she has been on maternity leave for 6 weeks now, and has brought along her newborn baby Jessi. The baby starts crying and Carisi takes her out of her stroller and soothes her, Rollins is impressed.

At school a kid name Travis is having sex in the a car in the school parking lot with a much older woman. The bell rings and he hops out of the car and runs to class – the woman teases that he is going to be late. Travis brag to his friend Jordan that he skipped lunch and “ate out.”

A kid named Zack overhears their conversation. They head to English class, the woman that Travis was having sex with is their teacher – Mrs. Burnap. After class, Mrs. Burnap invites travis’s friend Jordan in to the supply closet and proceeds to have sex with him too. She teases him and says that it will help bring up his average. After school, Zack receives a text message – it’s a photo of a woman’s boobs. He hits the streets late at night and a dark colored car picks him up.

The next day at work, Olivia is arguing with Dodds – he doesn’t think that Rollins is going to come back to work and he wants to hire someone new. He also is complaining that Fin isn’t picking up his share of the work. Olivia tells Dodds not to underestimate her team.

Dodds and Fin head out to work a call together – Zak’s mother reported him missing, he has been gone over 48 hours. She says that he was supposed to go to his father’s for winter break, but he never showed up. Zak’s father Cole shows up and starts arguing with Zak’s mom Serena – he says she is over-reacting. Cole has access to Zak’s text messages because they share a phone plan – he shows them to the cops. It sounds like Zak was texting Mrs. Burnap too. She told him to meet him at the train station and to bring his passport so that they could “fly away together.”

Back at the police station, they are trying to track down the woman that Zak was texting – she was using a burner phone and they cant trace the number. They can tell from the texts that the woman was most likely a teacher – and she mentioned Travis and Jordan in the messages. Carissi and Dodds head to the Principal’s house, he says that there are a lot of young teachers. He gives Carissi and Dodds Travis and Jordan’s addresses.

Olivia and her team head out to question Travis and Jordan. Jordan caves – he gives up Mrs. Burnap’s name. He says that she made him have sex with her so that he can pass English and won’t get kicked off the wrestling team. Olivia runs Mrs. Burnap’s name – she has been school-hopping for years now, and her former co-workers heard rumors about her and other students.

They track Mrs. Burnap’s creit card to a ski resort in Vermont – the desk clerk confirms that she checked in with a young male. They find Mrs. Burnap in bed with a guy, but it’s not Zak she says that they got married Friday night…and he is 22 years old. Olivia tosses Mrs. Burnap some clothes and tells her to get dressed because she is under arrest.

Back at the police station, Fin questions her new husband David – he says that he has known Mrs. Burnap for years. They met when he was a senior in high-school, and it was her first year teaching. David confirms that he was with her the entire weekend. Olivia tells them to keep David talking, she thinks he knows something about Zak.

Mrs. Burnap’s lawyer shows up and she agrees to speak to them – she insists that she never talked to Zak, the texts weren’t from her. Mrs. Burnap says that she was set up – and she thinks that she was set up by Jordan’s wrestling coach Mr. Basinski. She implies that Basinski might be gay. They bring Jordan in for questioning, he confirms that he sent the sexts from Mrs. Burnap to Basinski – and told him about what was happening with his teacher.

The NYPD heads to Coach Basinski’s house because he is not answering his phone. They barge in, and find plates and beers on the table – but the house appears to be empty. Carisi finds pictures of kids plastered all over the walls of the basement, they are all of kids on his wrestling team. They bring the pictures of the kids to the principal, but he doesn’t recognize them. At the police station – Travis recognizes one of the kids in the pictures, his name is Enrique but he barely spoke English and left school after a few months. Another one of the kids was named Sam – but he crashed his car in to a pole and died last year.

They get a lead on one of the kids – his name is Nat. They head to his job, and question him about Coach Basinski. He says he never spent any “alone” time with Coach Basinski. They reveal that Zak is missing and they think Basinski took him somewhere. Nat caves and tells them that Basinski had a place in Pennsylvania out in the country. Nat insists he never went to the cabin, but he tells them where it is.

Olivia and Fin head to the small town and ask around, they find a girl that confirms she saw Zak with Basinski that weekend. She gives them the address to the cabin and they head up in to the woods. They arrest Basinski – and begin searching the cabin. They find Zak unconscious lying in a bed without any clothes on.

Back at the hospital, Zak says that he oesn’t remember much He had a few drinks with Basinski and then he passed out. When he woke up, he was in that cabin and the doors were locked – and the coach was laying in bed with him. Zak starts crying and says that he is not gay, and the coach was touching him with his mouth. Zak says “nothing else happened” and announces he is ready to go home.

They head to court and Basinski pleads “Not Guilty.” The judge sets his bail at $75,000 and orders him not to make any contact with minors until his next court date. Meanwhile, Zak’s parents show up at the police station – they don’t want Zak to have to testify, they are afraid the other kids will tease him for what happened with Basinski.

Olivia is on a mission to get one of the other boys hat were molested by Basinski to come forward. She pays Nat a visit again and thanks him for their help – because of his tip, they were able to rescue Zak. She explains that Zak’s parents won’t let him testify and Basinski might walk. Nat tells them to “forget it” – he’s not doing it. A few hours later, Nat shows up at the police station. He says that he got Basinski to confess to everything on tape. He shows Olivia a video of himself beating up Basinski, then Basinski starts crying and says that he did have sex with the boys. – and he names half a dozen boys.

The police rush to Basinski’s house – they find him lying in a pool of blood on the floor, barely conscious – right where Nat let him. At the police station Olivia gets word that Basinski died en route to the hospital in the ambulance. Nat doesn’t seem upset, he says that he got a great night’s sleep last night. Olivia and Finn have no choice but to arrest him and charge him with murder. Olivia tells him to sit tight and not say anything until a lawyer arrives.