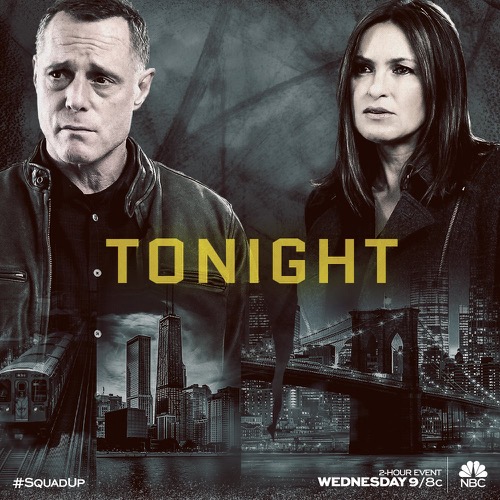 On the last episode, a woman was followed home and raped outside her building, where several neighbors witness the crime but fail to call for help. Did you watch the last episode? If you missed it, we have a full and detailed recap right here for you.

Tonight’s season 17 episode 14 looks like it is going to be great and you won’t want to miss it, so be sure to tune in for our live coverage of NBC’s Law & Order: SVU at 9:00 PM EST! While you wait for our recap hit the comments and let us know how excited you are about the new season?

Tonight’s episode of Law & Order SVU kicks off with a woman at home making a pan of lasagna – she fills sandwich bags with a cell phone, cash, and some sort of knife an hides the bags under the cheese.

At the office, Olivia calls Voight at Chicago PD and tells him that something came up with a case that they were working on. Dr. Yates is claiming that the victims they never ID’d could be the remains of missing runaway Western girls. Yates is sitting in a jail cell – for other murders. Olivia says that Yates wants to talk to Rollins, but Olivia doesn’t think it is a good idea. Olivia thinks that Hank should send Erin Lindsey – Yates would probably talk to her. Hank says he will think about it, Erin is still pretty torn up about what Yates did to Nadia.

The next day Erin arrives as the prison to speak to Yates – she and Jay brought along photos of the remains of the Jane Does. Jay shows Yates some pictures of missing girls in Chicago. Yates starts rambling about the girls “whoring themselves out at truck stops for cocaine.” Yates won’t cooperate, and says that he would be more comfortable talking to Rollins.

Back at the police station, Erin and Jay fill Rollins and Olivia in on their unproductive meeting with Yates. The next day Rollins and Carisi head to the prison to try and talk to Yates. The warden raves about how well Yates has been doing in prison – Carisi scoffs that he has been “charming the warden and it is a classic psychopath move.”

Rollins shows Yates the pictures of the missing girls from Chicago – Yates says that one of them was a working girl in Chicago named Chyvonne Kelly, and she “might be lying in the weeds along I-90 just waiting to be found.” The other three victims he says might “possibly be at Pelham Bay,” but he won’t confirm any more of the ID’s until Rollins makes some phone calls and gets him moved to “Honor Block” in prison.

Rollins and Yates head back to the prison the next day and talk to the Warden – they are able to pull some strings and get Yates moved to Honor Block. Carisi pays Yates’ rival Rudnick a visit and warns him that Yates is moving in to Honor Block with him. (Yates ratted out Rudnick, and in retaliation Rudnick murdered Yates’ fiancé before he was arrested.) In Rudnick’s cell is a pan of half-eaten lasagna that Mrs. Wilkins (the prison psychiatrist) made for him – and has been filling with contraband.

Dobbs and Olivia head up to the prison with Barba to meet with Yates. Rollins is NOT happy that Olivia wouldn’t let her go back to talk to Yates. She rants to Carisi that just because she is a mother now doesn’t mean she can’t talk to serial killers any more – Rollins is sick of being coddled.

At the prison – all hell is breaking loose. Someone flew drones over the prison yard and had them dropping packages of guns, drugs, and cell phones. Olivia, Barba, and Dobbs hide out inside while the guards get the prisoners under control and take away all of the new contraband. Meanwhile, the guars realize that Yates and Rudnick have been missing for several hours and are searching frantically for them. They find a hole drilled in the wall – it looks like Rudnick and Yates have escaped.

Olivia questions Rudnick’s cellmate Jose, he says that Rudnick dug the hole all by himself and Yates made him take him with him. They send one of the guards down the hole – and sure enough it comes out in a man hole on the outside of the prison wall. Olivia and her team rush to the man hole and a body is found a few feet away, it’s a dead construction worker that was helping them escape.

The Warden is furious, she thinks that Rollins helped Yates break out – it seems a bit suspicious that Rollins fought so hard to get Yates transferred to Honor Block so that he could escape. She shouts at Olivia to get Rollins up to the prison ASAP.

An official manhunt is underway – the prison has called in police agencies from all over the state and every news channel has Yates and Rundick’s picture plastered all over it. At the prison Olivia learns that Mrs. Wilkins, the prison therapist was smuggling in contraband in lasagna. She learns that Wilkins’ first name is Bronwyn – and this isn’t her first time helping a prisoner escape. She used to work at Riker’s Island and helped another killer escape by smuggling contraband in to baked goods.

Olivia’s team gets strapped up and rushes to Bronwyn’s house – she is nowhere in sight, her husband said that she took the car and had a family emergency. They track down the car and find Bronwyn tied up in the trunk and screaming hysterically – she says she has no idea where Yates and Rundick went. They bring Bronwyn in for questioning and she insists she doesn’t know where they were going – but she gave them a gun and a map from her house.

Yates and Rudnick are trying to make it to the Canadian border – there are a trail of people calling in sightings. They get a tip that the two men are staying at an abandoned cabin, a state trooper arrives on the scene first and he is murdered. When the Carisi and Rollins arrive with the rest of the police, they find the dead state trooper – and Rudnick hiding in a boat. Rudnick is covered in blood and barely alive, Yates is nowhere in sight.

Rudnick is rushed to the hospital, Carisi tries to question him about where Yates was headed. Rudnick confirms that he was heading to Wellesley Island where a boat is waiting for him. It’s late at night and everyone is headed in to regroup. Erin and Dodds are driving down a dark country road, and they come across an abandoned police car – the officer was shot to death and lying a few feet away from the car. While Erin and Dodds are investigating – someone in the woods starts shooting at them.

Dodds is shot and drops to the ground. He calls for back-up and orders Erin to stay down – but she runs in to the dark woods. She comes across a cabin and there is a dead body lying in front of it. She finds a note in the dead man’s mouth. It says “See You back home Erin.”