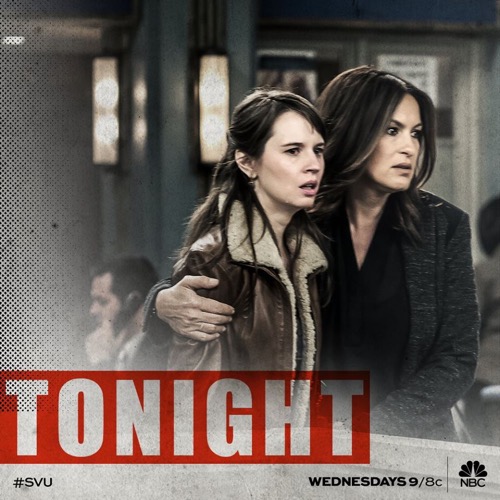 On the last episode, a squad member was implicated in a cover-up for a sex-trafficking operation involving high-ranking government and church officials, so the SVU team worked to sort out the complicated case and clear their coworker’s name. Did you watch the last episode? If you missed it, we have a full and detailed recap right here for you.

On tonight’s episode as per the NBC synopsis “Detective Carisi (Peter Scanavino) lives undercover at a homeless shelter to determine if one of its sex offender residents is the suspect in a string of neighborhood rapes. Also starring Mariska Hargitay, Ice T and Kelli Giddish.”

Tonight’s season 17 episode 19 looks like it is going to be great and you won’t want to miss it, so be sure to tune in for our live coverage of NBC’s Law & Order: SVU at 9:00 PM EST! While you wait for our recap hit the comments and let us know how excited you are about the new season?

Tonight’s episode of Law & Order SVU kicks off with two women walking down the street – one of them is pushing a baby in a stroller. There are a group of shady looking guys standing on the curb – so they cross to the other side of the street. The women say their goodbyes and go their separate ways. Sofie Nomak heads to spin class, when she walks in to her building later that night, someone in a ski mask follows her inside and pulls a knife on her and rapes her.

Sofie’s neighbors complain that there is a new homeless shelter opened up down the block – and it is full of rapists and men on parole. They are certain that is where Sofie’s attacker came from. Olivia and her team head to the homeless shelter, they tell all of the men there with sex crimes on their record that they have ot go down to the station for questioning. Olivia is shocked to see Gregory Searles there – she thought they had him locked away for good. While Gregory is explaining they let him out on parole for health reasons, one of the members of the shelter barges in with donuts – it’s Carisi.

Olivia and Fin act like they don’t recognize Carisi and bring him down to the station for questioning. Olivia takes Rollins and Fin aside. She explains to them that Carisi is undercover, because there have been two rapes in this neighborhood this month. Rollins thinks that Carisi doesn’t look too good – she wants Olivia to pull him out.

Olivia sits down with Sofie, she tells her what happened. Sofie’s dad is there and he is furious – he screams at Olivia that they shouldn’t have let sex offenders move in to the neighborhood. Olivia records all of the guys’ from the shelters’ voices – but Sofie doesn’t recognize any of them.

The next day Carisi is walking down the street by the shelter, Sofie’s dad pulls up with two other guys. They shout that they saw Carisi at the police station and they jump him with a baseball bat. One of the other guys from the shelter, Caskey, step in and save Carisi, but not before he takes a couple of hits to the back with the baseball bat.

Meanwhile, a witness comes down to the police station –she ID’s Carisi’s new friends Caskey and says that he saw her outside of Sofie’s house right before she was raped. Caskey insists that he was at his wife’s house when Sofie was raped. Rollins and Fin pay Mrs. Caskey a visit. His wife insists that he was with her during the rape, and she made a pot roast for him. She insists that Caskey isn’t a rapist – he got drunk at a bachelor party and raped a waitress ten years ago. Fin pressures her, she finally confesses that she got home late from work that night and she doesn’t know how long he was there.

Carisi heads to group therapy at the shelter – but their therapist Robin is late. Caskey shows up late too. He tells Carisi not to worry, Robin probably got caught up in traffic. But, she didn’t – Robin is dead. Olivia and Fin get called to the scene. Someone heard Robin running down the street screaming, she had been stabbed, she dropped on the sidewalk and died right there in broad daylight.

Carisi rushes down to the police station – Olivia fills him in and says that someone raped Robin and then stabbed her and left her for death. Whoever raped Robin, she ripped their ski mask off, and they think she was killed because she saw her face. Carisi says that Loomis never showed up to group, and Caskey was a little late. Carisi insists that Caskey is innocent, he is certain that Loomis is their guy.

Rollins and Fin head to the shelter and search Loomis’ room, he is Greg Searles’ roommate. Rollins finds a set of keys hidden under Loomis’ mattress, it belongs to a storage locker down the street. They check out the storage locker and they find womens’ underwear, a knife, and a bag full of jewelry that looks like it has been stolen. They take Loomis down to the police station. Rollins runs a search on the jewelry – one of the necklaces was reported stolen during a rape in Nassau County a year ago – but there is no sign of Sofie’s necklace.

Olivia and her team pull the rape reports from Nassau County, two of them match Loomis’ MO, and the rapist didn’t speak, which would make sense because Loomis has a stutter. But, it looks like there is a copy-cat rapist that is framing Loomis The only other guy at the shelter with Loomis when he was in Hempstead and where he is now – is Carisi’s pal Caskey.

Carisi is furious, he confirms that Caskey was at both shelters during the rapes and then he confronts him in the bathroom ad pulls his badge on him. Carisi brings Caskey down to the police station. They bring in the rape victim from Hempstead to see if she recognizes his voice. The rape was a year ago though, and the victim can’t make a positive voice ID.

Caskey’s lawyer Zimmerman shows up at the precinct – he shouts at Olivia for holding his client overnight. The rape victim hears Caskey’s lawyer shouting, and she freezes up. She recognizes Zimmerman’s voice – she tells Olivia that Caskey’s lawyer is the man that raped her.

Olivia and Carisi sit down with Caskey and his lawyer. They decide not to tip their hat, and say that they are searching Caskey’s house – his lawyer Zimmerman beats them there and plants Robin’s jewelry in the bathroom so thtat the police find it. Only, Olivia was two steps ahead of him and set up a camera and caught Zimmerman planting the evidence. They arrest Zimmerman for the rape and murder of Robin – Carisi apologizes to Caskey for doubting his innocence.

Zimmerman heads to court and pleads not guilty – the judge remands his bail and sends him to prison until court. Loomis is also arraigned for the rape of Sofie, he pleads not guilty too. Case closed! Carisi is still upset about Caskey being framed – so Rollins invites him over to cook him dinner.