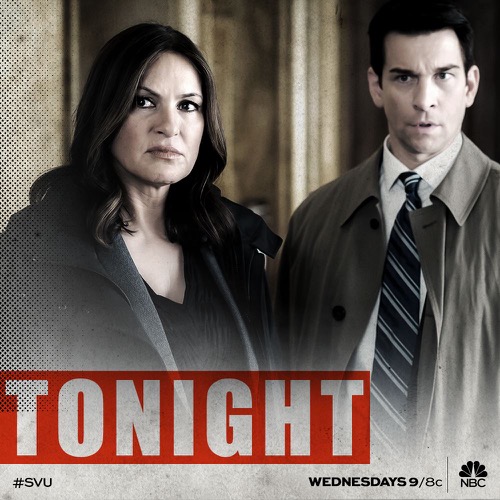 On the last episode, a contestant on a reality-dating show claimed she was raped, so the squad investigated and unintentionally became part of the show thanks to the producers. Did you watch the last episode? If you missed it, we have a full and detailed recap right here for you.

On tonight’s episode as per the NBC synopsis “Female prison inmates make accusations of sexual assault against a corrections officer, so the SVU detectives arrest him, but then the suspect’s union targets the SVU squad and ADA Barba.”

Tonight’s season 17 episode 22 looks like it is going to be great and you won’t want to miss it, so be sure to tune in for our live coverage of NBC’s Law & Order: SVU at 9:00 PM EST! While you wait for our recap hit the comments and let us know how excited you are about the new season?

Tonight’s episode of Law & Order SVU kicks off with Carisi, Rollins, and Finn gathered around the computer at the office. They are looking up Carisi’s bar exam results … he passed! Olivia walks in on them all celebrating and asks what’s up – they explain that Carisi just passed the bar. Olivia jokes, Does that mean you are leaving too?” She reveals that this is Dodds’ last week with them, he is transferring to Joint Terrorism. Olivia offers to take the all to lunch – Fin says he has plans, he has to meet up with his son. Dodds passes by, and everyone gives him a cold shoulder.

Meanwhile, a cop named Gary is getting ready to go to work. His wife whines that he was supposed to have the day off. He picked up some OT so that they can take the kids to Disney Land. The cop heads down the street in his car, he picks up a woman named Charisse that looks like a prostitute and taunts her about having an open container of alcohol, he tells her to get in the car.

Fin heads to lunch with his son Ken. He reveals that he and his boyfriend Alejandro are starting a family – they found a surrogate mother and she is three months pregnant. Fin is going to be a Grandpa! While they are talking Fin’s son’s phone rings – it’s Charisse, apparently she is his client, and she is sobbing. She cries that the Corrections Offiecer from Rikers named Gary just raped her.

Olivia and Fin head to the hospital to meet Charisse. She says that Gary used to just make her go down on him. But, she wouldn’t do it any more so Gary hit her and raped her. Charisse confesses that Gary raped her all the time when she was in Riker’s. He told her no one would ever believe her because she is “just a black crack whore.”

Olivia heads back to the police station and briefs Barba and her team on Gary Munson. Barba says that it isn’t going to be easy. It’s the word of a single black mother with a drug problem and a prison record against a cop. Barba says that Rikers is like “Lord Of The Flies” – he doesn’t want Gary to know that they are investigating him or he will take it out on his victims. Olivia says that they will come up with a front and tell the guards at Rikers that they are investigating a sex trafficking ring.

Fin and Dodds head to Rikers with a list of females that they think may also be abused by Gary Munson. They ask the warden for security footage, they want to try and catch Gary taking girls in to the chapel. Fin and Dodds question Gary to get a feel for him, they pretend that they are investigating a sex trafficking ring – and Gary seems to fall for it.

Back at the police station they watch the security footage – sure enough they catch Gary taking her in to the chapel. And, there is a female CO that actually stands guard at the door to make sure that they aren’t caught.

Their case is getting even messier though – Charisse got arrested and she is headed back to Rikers. Gary sees her getting off the prisoner van and heading to booking. He taunts Charisse and says that she just can’t get enough of him – and he can’t wait to see her tomorrow.

Olivia and Fin sit down with Charisse, she tells them that Gary is the one that got her arrested. She cries that he has complete control of her and her life is over. Charisse says she doesn’t even know why she was arrested – two cops pulled up and roughed up her boyfriend and cuffed her and threw her in a cop car and took her to Riker’s.

Olivia’s team pulled the security footage from the street cameras during Charisse’s arrest and it is clear that she wasn’t doing anything wrong. Barba gets Charisse released – and three other women that were being raped by Gary so that he can’t hurt them in Riker’s any more. But, it doesn’t go as planned – none of them want to cooperate and testify against Gary Munson.

Olivia talks to Charisse and convinces her to help them set up Gary Munson so that he can pay for what he did to her and the other girls. Charisse meets up with Gary – he tells her to take a walk with him. Charisse says that her boyfriend is still in jail and she was hoping he could help her. He pulls her in to the basement of an empty building and puts a gun up to her head. Fin and the team barge in and arrest him.

Gary’s lawyer and union rep meet Olivia and Barba at the police station. Barba tells Gary that if he pleads guilty to one rape charge – they will drop the other charges. Gary refuses the deal though and he heads to court and pleads not guilty. In court, Barba tells the judge that Gary is a “predator” and he uses the DOC to access their addresses. Gary’s bail is set at $200,000. After court, Gary’s wife throws a fit and shouts at Olivia that Gary is a good husband and a good father and they are setting him up.

Now, they need to find evidence to prove their case – which is easier said than done because Gary was careful. Barba manages to get a warrant to search Gary’s house, they turn it upside down trying to find something with Charisse’s DNA on it.

Meanwhile, Olivia brings in Orita, the other CO that used to keep lookout at Rikers for Gary while he was raping Charisse. Orita finally talks – she tells Olivia that Gary fakes his time card and leaves 6 hours early every Sunday. He goes to an old inmates house, named Leanne Carter, her sister Della is still in prison.

Rollins and Fin pay Leanne a visit. She agrees to come testify in court, she tells the judge that Gary comes to her house every week and forces her to have sex with him so that her sister Della won’t get beaten in prison. Orita takes the stand and testifies that she was Gary’s lookout when he raped the women at Riker’s and in return he got her overtime pay for hours she didn’t work.

The correction officers don’t take kindly to Barba slaughtering Gary in court – Olivia and her tea have to give him a police escort out of the courthouse, one man stops him and threatens to crack his head open right in front of everyone. Barba takes Olivia aside, he tells her to make sure their team watches their backs … they just started a war.