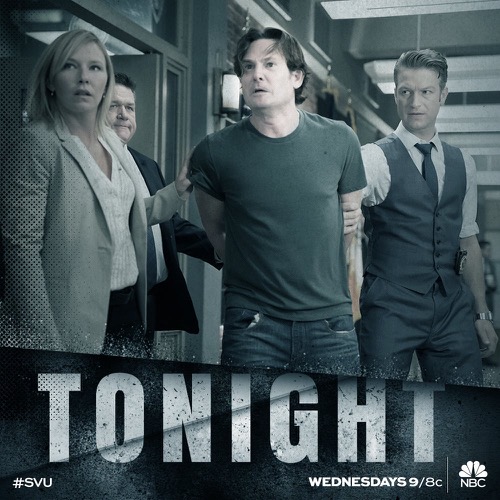 Tonight on NBC Law & Order SVU returns with an all-new Wednesday, September 28, 2016, episode and we have your Law & Order SVU recap below.  On tonight’s Law & Order SVU season 18 episode 2, where newly tested DN evidence leads to the exoneration of a prisoner who served 16 years for a rape conviction.

Did you watch the season 18 Law & Order premiere where a child was discovered wandering alone in Central Park, and the search for his parents led to clues about a planned mass casualty event? If you missed it we have a full and detailed Law & Order SVU recap, right here.

On tonight’s Law & Order Season 18 episode 2 as per the NBC synopsis, “After 16 years in prison, a convicted rapist (guest star Henry Thomas) is exonerated due to newly tested DNA evidence. But only a day later, Fin (Ice T) is called to the scene of a shocking crime and must once again investigate the whereabouts of the man he arrested years ago.

The Special Victims Unit thought that they were correcting a grievous error when they released that a man they sent away for sixteen years after a recent DNA testing proved that he had actually been innocent of the rape. So Sean Roberts was supposed to have a fresh start and he had wanted to start that by forgiving the woman that had accused him of rape. Melanie Harper had admitted that she had been confused and that she had been sorry so her daughter Ashley had wanted to welcome Sean into their family as a way for all of them to move forward. But it wasn’t long after that when SVU got called to a scene.

Melanie had asked for Detective Tutuola personally because her daughter Ashley had been brutally raped and burned at her house and she had needed him there with her as a familiar face. However, Melanie had also asked for Finn because she suspected that her daughter’s rapist had been Sean Roberts. Melanie had later explained that she heard Sean and Ashley talking before the incident. So she suspected Sean either was the attacker or that he might have seen something before he left the house. And so that had put SVU in quite a predicament.

They couldn’t exactly accuse Sean of rape again seeing as he had been innocent the first time around however they needed to question him as a possible suspect because he had talked to Ashley on the night of the rape. So Sean had told them that he had talked Ashley and a friend of his also admitted that he had comforted Ashely late into the night because her fiancée was threatening to call of the wedding. Yet, sadly Ashley couldn’t corroborate the story because she never recovered from what happened to her and she died from her injuries before she could talk to anyone much less SVU.

Though fortunately the detectives had at least three viable suspects that they could still look into. There had been Sean of course because he might have been the last person that Ashley saw, there had also been the fiancée because he had been upset with Ashley for inviting Sean to the wedding, and there had also been a creepy neighbor. The fiancée had sworn that he hadn’t hurt Ashley because he loved her meanwhile the creepy neighbor had been the one that was spying on Ashley by looking through her bedroom window. So the neighbor whose real name was Charlie had been their best bet.

At least that’s what the detectives thought when they went to go question Charlie. Charlie had spied on Ashley and later it was revealed that he had even taken pictures of her without her consent. So they looked into Charlie and had found his hiding spot on the roof where they had found the knife that had been used on Ashley. But surprisingly Charlie hadn’t been their rapist/murderer. Charlie had actually been having sex with his girlfriend at the time Ashely had been attacked and he had also recorded it so the knife had merely been a coincidence. He and his girlfriend had apparently found it on the street and so technically made Charlie a possible witness.

Charlie, though, sucked as a witness. He was a heavy stoner and he had mostly agreed with everything that Rollins said. So Charlie’s identification had been poor at best and he had fingered Sean as the rapist because he thought that would help Ashley. However, Sean and more importantly Sean’s lawyer had felt that accusation was part of a frame-up. Sean was suing the city and he personally had an ongoing civil suit against Finn for emotional distress because of what happened to him while he was in jail. And so Sean thought that the case against him was part of SVU’s revenge because he swore he couldn’t rape anyone after he himself had been raped in prison.

So Sean and his lawyer were vigorously fighting the charges and they were fully prepared to knock down anything and everything that they faced in court. Yet, ADA Barba had thought that he had ensured an easy victory because he had a whole list of witnesses that he felt would put Sean away, but it had come as a disappointment when Sean’s lawyer John Buchanan torpedo almost all of them. Buchanan destroyed the expert that Barba had called upon because he said the expert couldn’t give an actual profile without ever having met Sean. And funnily enough it had been pretty easy when Buchanan went on to destroy Charlie as well.

Charlie’s testimony had been weak at best. He hadn’t been sure of what he saw and he had identified Sean as a way to score points with the very attractive Rollins. So Buchanan played on that and got Charlie to admit in open court that Sean might not have been the man he saw. But the fact that Buchanan had done such a good job of creating reasonable doubt in court had made Melanie question what she heard that night. She later told Finn that she had already sent Sean away for sixteen years because of a mistake and she couldn’t do that again if she was wrong. And so Melanie didn’t want to testify in court.

Though Barba called on her anyways. Barba thought that he could get Melanie to admit that she did hear Sean that night. So he came up with a plan where he accused her in court of denying that she heard Sean because if Sean was guilty then she was guilty. After all, Melanie had been the one that sent Sean to prison where he had been beaten and raped so if he was guilty then Melanie had been the one that turned him into a rapist. And getting Melanie to admit that had been her fear had been enough for the jury.

Buchanan had asked for a plea after that and Sean was able to get an agreement where he would serve five years for manslaughter. So when he later admitted in court that he had raped and killed Ashley, that finally proved that SVU had got it right this time. They had found their rapist and he had actually been guilty.