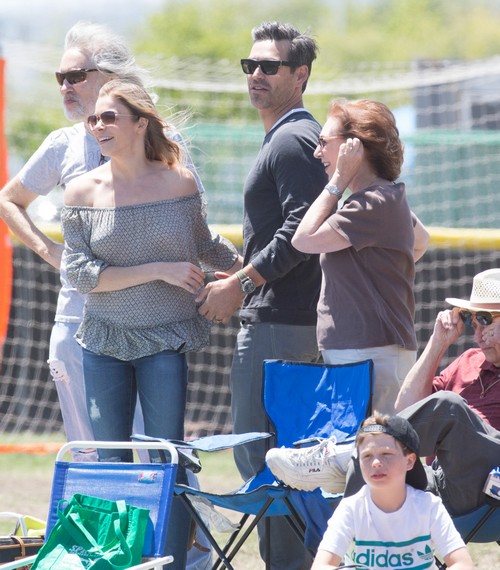 Is LeAnn Rimes finally pregnant with baby number one? It’s no secret that LeAnn Rimes desperately wants to have a baby of her own with husband Eddie Cibrian. During LeAnn and Eddie’s VERY short lived VH1 reality TV show, it was an ongoing storyline.

However, despite years of trying, LeAnn Rimes has been unsuccessful at getting pregnant. But, is she finally rocking a baby bump? LeAnn Rimes attended her step-son’s soccer game with husband Eddie Cibrian over the weekend, and the other soccer-moms were apparently buzzing about what appeared to be a baby bump.

LeAnn, who rarely leaves the house without a bikini, was wearing a frilly and loose fitting (and hideous) top – and the internet is convinced that it is a maternity top.

Further more, various witnesses at the soccer game are telling media outlets that they have definitely noticed a growing baby bump on LeAnn Rimes at her step-son’s recent games. It seems a bit odd that LeAnn’s baby bump would “pop out” over night, earlier this month LeAnn Rimes was photographed in a bathing suit and her belly was super flat.

However, photos tell us we are going to have to agree with the whole maternity top theory. Because, why on Earth would anyone wear a shirt like that unless they had to, to cover up their baby bump? If LeAnn Rimes is finally pregnant, its no secret that she has had rumored fertility issues, so it seems to make since that she would try to keep the pregnancy a secret for a few months just to make sure that everything was okay with the baby.

What do you guys think, is LeAnn Rimes finally pregnant with her and Eddie Cibrian’s first baby together? Or does she just have horrible taste in fashion? Let us know what you think in the comments below!

LeAnn Rimes and Eddie Cibrian cheer on his son Jake at his soccer game in Woodland Hills, California on May 15, 2016. The pair were joined by Eddie’s ex and Jake’s mother Brandi Glanville. FameFlynet