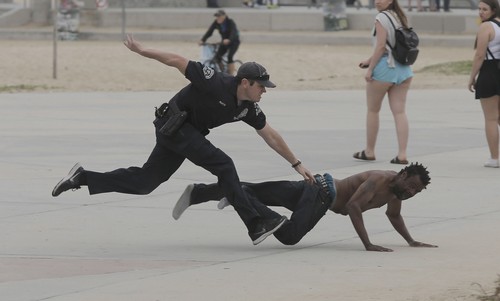 A police chase near the Venice Beach boardwalk temporarily stopped filming of the Showtime blockbuster Ray Donovan. Liev Schreiber, the title character of the crime drama, was not harmed.

According to the Daily Mail Schreiber and the cast and crew had just begun taping an episode of the fourth season when the police pursuit of a shirtless and shoeless man rushed through near the set on Venice Beach where filming was taking place.

Several Los Angeles police officers were involved in the apprehension of an unknown suspect. In photos of the pursuit, one cop is seen chasing a man and wrestling the individual to the ground. Additional police officers arrived on the scene and were needed to assist in the arrest.

An LAPD officer used a Taser on the man in question as he struggled on the ground, appearing to resist arrest. The man can be seen writhing in pain as Taser wires come out of his chest. Half a dozen police officers remained on the scene as the suspect was handcuffed and lead away to a police car.

Liev Schreiber portrays the title character, a high-powered fixer who cleans up messes for the rich and famous. The rest of the cast of Ray Donovan includes Jon Voight, also a Golden Globe winner for his portrayal of Donovan’s shady father Mickey Donovan. Ray’s partners in the fixer business are Lena [Katherine Moennig] and Avi [Steven Bauer].

It is not known which Ray Donovan co-stars – Dash Mihok [Bunchy Donovan], Eddie Marsan [Terry Donovan] or Paula Malcomson [Abby Donovan] – were filming with Schreiber at the Venice Beach location. Newest cast member Lisa Bonet [Marisol] did not appear to be on set either.

At this time it is not known if the suspect had intentions of harming Liev Schreiber or Jon Voight. The incident happened just a short distance from where Schreiber was filming scenes for the Showtime crime drama. The Golden Globe winner did not appear in any immediate danger. Check all your Ray Donovan news right here at CDL!