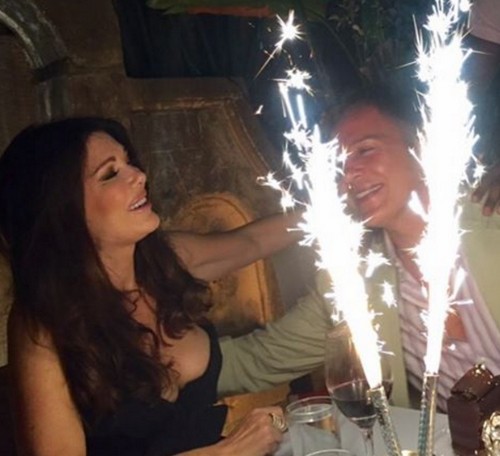 It doesn’t look as if Lisa Vanderpump will return for season 7 of ‘The Real Housewives of Beverly Hills.’ It’s not about money though – Lisa may quit because she wants to focus on ‘Vanderpump Rules.’

What is keeping Lisa from signing on the dotted line? A source told TMZ that Lisa Vanderpump isn’t asking Bravo for more money, the entrepreneur is simply too busy with other projects. Lisa and her husband Ken Todd own 3 restaurants on the go.

Lisa is center of the hit ‘The Real Housewives of Beverly Hills’ spinoff ‘Vanderpump Rules’ which takes up much of the businesswoman’s time. Lisa had also begun dedicating a large portion of her time to campaign to end the Chinese dog meat market.

Some of the ladies of ‘RHOBH’ attended a rally in support of Lisa during season 6 of ‘The Real Housewives of Beverly Hills.’

In addition to her crazy busy schedule the source also revealed that Lisa was very unhappy with the negativity of the ‘RHOBH’ cast members and was upset because the ladies seemed to band together to pick on Lisa throughout the sixth season.

Kyle Richards, Lisa Rinna and Erika Girardi will be back for ‘RHOBH’ season 7 and TPTB may even bring Kim Richards back as a Friend of the Housewives. Eileen Davidson’s status is still up in the air as far as we know.

It was previously reported that producers wanted to drop Eileen down to Friend of the Housewives either because Eileen’s salary is too high or a lack of storyline for ‘The Young and the Restless’ actress. Yolanda Hadid has been fired and reports say Kathryn Edwards who joined the cast during the sixth season has been let go.

What happens if Lisa leaves ‘The Real Housewives of Beverly Hills’? Will viewers still tune in? Lisa has been a fan favorite since the first season of the show as well as Lisa’s Pomeranian Giggy. The little guy, who suffers from alopecia, has his own contract with Bravo. If Lisa leaves Giggy goes with the ‘RHOBH’ star.

If Bravo were to offer to make Lisa a Friend of the Housewives and ensure that she would not be ostracized by the other ‘RHOBH’ cast members would Lisa Vanderpump return for season 7 of ‘The Real Housewives of Beverly Hills’?