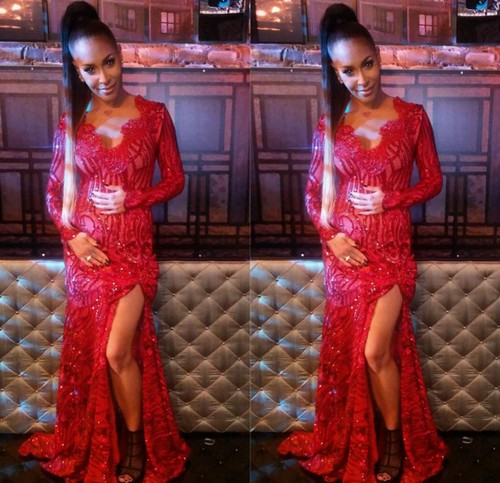 Amina Buddafly’s pregnancy was probably the worst kept secret in Hollywood (thanks to Rich Dollaz’ big mouth), but the Love & Hip Hop star confirmed during the Season 6 reunion on VH1 that she is indeed pregnant again by Peter Gunz.

This will be Peter’s 10th child, and ironically Amina confirmed her pregnancy the same week that Peter’s other baby-mama Tara Wallace introduced her new baby boy Gunner to the world.

The fact that Peter Gunz basically has been in a relationship with both Amina Buddafly and Tara Wallace for years now is really just a tiny piece of the issue at hand. Love & Hip Hop New York fans took to social media to let Amina know that they were not impressed with her pregnancy.

Not only has Peter been openly cheating on Amina with Tara (and vice versa), but she just had an abortion during Season 6. Then, she was livid when Peter informed her that he was having a vasectomy, because that meant Tara got to have his last baby and not her. Fast forward a few months later – and here Amina Buddafly is, pregnant again.

After the Love & Hip Hop New York reunion episode aired on VH1, Amina took to Instagram to try and shut down some of the haters and defend her decision to have another baby by Peter Gunz.

Amina shared a photo of her with her baby bump and captioned it, “There is one reason and one reason only why I got pregnant again. Actually there is no “I” in this, its “WE”! But since i am the one carrying: “I Got pregnant again because I made love to the man I love.” Now y’all can debate on why we did it until ya hair turns grey.. I feel good knowing that WE know and you just ‘think’ you know…”

Amina ended her rant by saying that Peter Gunz is the “best baby daddy ever.” Well, we should hope so – the man has had a lot of practice. How do you feel about Amina Buddafly’s pregnancy? Share your thoughts in the comments below!