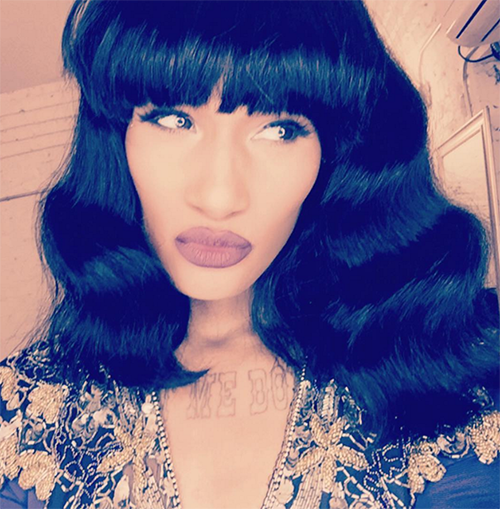 Love & Hip Hop Atlanta Season 5 has a premiere date on VH1 of April 4 – and spoilers tease that fan favorites K. Michelle, Tammy Rivera, and Waka Flocka Flame will be back for more drama in 2016. But the veteran stars’ big returns have been overshadowed by even bigger news: season 5 of Love & Hip Hop Atlanta will include the first ever trans woman on the franchise, a newcomer named D. Smith.

Chatter that the LHHA cast would be including transgender star has been floating around for months, but this week VH1 confirmed the news and introduced D. Smith. According to the network, D. Smith is not just a token transgender cast member – she actually has ties to some major rappers and is a very successful music producer.

Love & Hip Hop Atlanta spoilers from VH1 revealed, “This Miami-born, Brooklyn-bred Grammy Award-winning writer turned artist has worked with some of the hottest in the game, including Lil Wayne. Smith’s defining moment came after being tapped by Lil Wayne to be a part of his most successful project to date “The Carter III,” which sold one million copies in its debut week, one of only three rap albums in history to ever achieve this feat. With her spitfire sidekick and aspiring singer Betty Idol by her side, this dynamic duo will take the Atlanta scene by storm.”

It sounds like D. Smith could be giving some of the Love & Hip Hop Atlanta cast members a run for their money. And there could be some serious drama going down between D. Smith and Lil Scrappy – who is apparently not pleased to be sharing the show with a trans individual. Scrappy went on a transphobic rant in an Instagram video yesterday and he was not a happy camper – it sounds like he may have gotten catfished by a woman who used to be a man. The rapper raged, “You a man with a penis with a wig on. I gotta check these motherf*****s’ baby pictures nowadays.”

So, are you excited for the Season 5 premiere of Love & Hip Hop Atlanta? Do you think D. Smith will be a good addition to the cast – how will everyone react to her? Let us know what you think in the comments below!