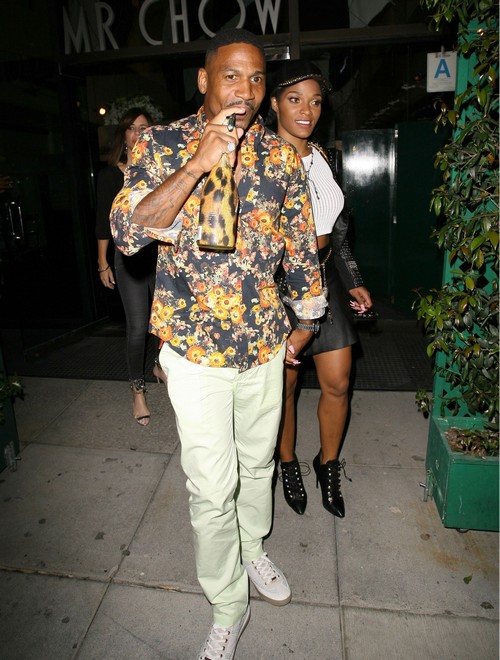 Love & Hip Hop Atlanta star Stevie J’s son Dorian called dear old dad a “Coke Head” on Instagram despite the fact that Stevie J swears that he has turned over a new leaf and has changed his ways. Despite his recent VH1 spinoff which featured him playing house with his kids in Los Angeles, going to church, and trying to make his “wife” Joseline Hernandez happy – Stevie J’s son Dorian is unimpressed and took to social media to let everyone know what he alleges are his father’s true colors.

It’s no secret that Stevie J has had a bit of drug problem in the past. There was that failed drug test in 2014, and numerous rumors about Stevie J and Joseline Hernandez’s financial problems stemming from alleged cocaine use.

But, according to Stevie J’s son Dorian – his father is still very much a “coke head” and he could also apparently work on his parenting skills.

Dorian took to Instagram and posted two photos. The first being a selfie, which he appropriately captioned, “Momma a pastor Father a coke head That’s one hell of a combo.” As if that wasn’t pretty blunt, there is another photo of Dorian, Stevie J, and one of their relatives.

Dorian referenced the Love & Hip Hop Atlanta star in the caption as well, writing “Macc’n with cuzzo and this sorry ass excuse for a father.”

It’s safe to say there is some serious bad blood between Dorian and Stevie J right now. It’s unclear what caused the riff between Stevie and his son – but so far Stevie J has not even acknowledged that his son posted on social media that he was a “coke head.”

Of course, Stevie J is a little busy these days trolling Joseline’s Instagram and accusing her of having sex with The Game. Maybe he should devote some of that time to his kids.

What do you think of Dorian’s posts? Did he cross a line? Share your thoughts in the comments below and check out all CDL’s the Love & Hip Hop franchise’s recaps and gossip!