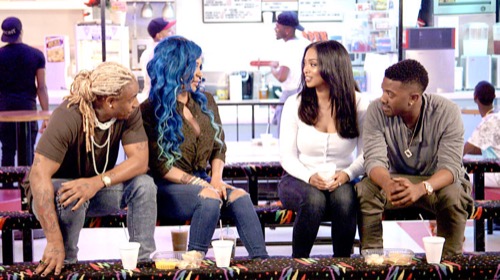 Did you watch last week’s episode where Max Lux’s anger towards Brandi Boyd persisted after her secret was discovered?  If you missed it and want to catch up, we have a full & detailed recap, right here for you!

On tonight’s episode as per the VH1 synopsis, “Nikki Mudarris attempts to juggle her relationships with Safaree Samuels and Rosa Acosta; and A1 Bentley and Lyrica take matters into their own hands. Later, Shanda’s confronted by Willie’s mistress.”

On this  week’s episode of Love and Hip Hop Hollywood the fight between Lyrica Marie and Dawn continues at the restaurant. Once they get the mom’s cleared out of the restaurant A1 says “I’m really upset.” Lyrica says “I’m sorry.” A1 tells her “There is only one thing to do, and that is upgrade.” He then presents her with the beautiful new diamond ring. Lyrica is so happy and excited. She tells him “You give me the ring when I am all upset.” A1 tells her “Let’s go home and see what you are gonna do for that ring.” They leave the restaurant together.

Shanda meets up with Teiarra to talk to her about her situation with Willie and his mistress. She tells her “Willie really messed up with this girl and I thought  we had put it on the back burner, but now she is hitting me up on all my social media sites saying that she is going to come for me.” Teiarra tells her “I hope i’m there when she shows up.” Shanda then reveals that  she has put together a small showcase to help get her music out there for people to hear.

Nikki is still dealing with her duel relationship drama. She says “I really like being with Rosa. She makes me happy and I enjoy her company. I also love being with Safaree. He  is so genuine, but I worry that when we are out someone is going to see us and take a picture of us out together.”

Teairra invites the girls to a dance class to hang out and talk. She really wants to get the information on Nikki’s love life. After the class is over they are all talking and Nikki finally reveals that she is seeing both a man and a woman. Teairra and Moniece  are both shocked at this news. When Nikki reveals that the guy is Safaree they are even more shocked. Teairra says “I love Nikki but I never thought he would be her type.” Moniece asks if they each know about each other. Nikki says “No. I haven’t told either one about the other one. Right now I am just trying to figure out how I am going to clean up the mess that my life has become.”

Ray and Princess take some time off from planning the wedding to go have some fun and go roller skating with A1 and Lyrica. A1 tells Ray and Princess  about the incident at the restaurant between their mothers. Princess is shocked. She says “I thought Ray’s mother Sonya was crazy, but at least she only fights with her words.” Ray tells A1 that he and Lyrica should think about eloping.

Shanda is preparing to perform at her showcase. After her performance she is sitting with Teairra when she sees Willie’s “Other Woman” Kyeshia step up on stage to perform. As she is performing she drops the mic and charges Shanda. The fight is on between these two women. Shanda tells her “Stop being a stalker. You’re stalking me.”

A1 meets up with Fizz and Safaree. He tells them that he is trying to get Lyrica to elope because of all of the drama between their mothers. Safaree shows up to the meeting intending to talk to Fizz about Nikki. Fizz tells him “It is really hard to pin her down.” Safaree tells him “She tells me that she is not seeing anyone else.” Fizz tells him “I know that you want to believe that but you have to know that this is not always the case.” Safaree says “I know people want me to be a player, but I am a one woman guy.” As the conversation continues Fizz tells him “You have to ask yourself is there somebody else?” A1  chimes in and tells him “Everything he is telling you is the truth. Welcome to Hollywood,” Safaree looks disheartened by the whole conversation.

Lyrica goes out to support her mom at her performance, She is still upset about the dinner the other night. When the performance is over Lyrica shows her mom her new ring. She asks her “How are we going to have a wedding?” Her mom says “We are going to plan it.”  Lyrica tells her “No, Me, you, A1 and Pam are going to be a family.” Her mom tells her “They are going to be your family.” The two women continue to talk and her mom asks her “Do you feel that you are willing to put aside all of the disfunction to marry A1? At this point it is just me coming into all of that.”

Willie finds a note from Shanda letting him know that she is leaving him to try and figure out how to do things better for herself and her children. She also tells him “The only way that we can have a chance of working things out is if you are one hundred percent honest with me. When you are ready to do that we can sit down and talk.”

Nikki is doing a photo shoot for the men’s section of her underwear line. Safaree shows up to talk to her. He tells her “I have a bone to pick with you.” He tells her “I was telling A1 how much I liked you and I enjoyed spending time with you. You go from hitting me back imediately to taking days to get back to me.” Nikki immediately jumps on the defense. She tells him “Have I done something to make you  insecure? I haven’t.” The argument continues. Safaree tells her “I am not an insecure dude. I just want to build something with someone I like.” Nikki tells him “I just want us to be in a more solid place before we come out and say that we are together.”

A1 and Lyrica have decided to elope. Lyrica is upset because their mothers can’t be there. She says “You know how I feel with your mom not being here with us and my mom not being here with us. There is nothing like having family here.” A1 tells her “ I know, but at the end of the day it is not about our families. It is about you and me. I’m here and I’m ready. Are you ready?” Lyrica is standing there in a beautiful white wedding gown with a bouquet of red roses and she is crying. A1 asks her “What are the tears for?” She tells him “I’m emotional about everything,” He asks her “About this or your mom?”  She tells him “Both.” He asks her “Are you going to take this walk with me?” She says “Yes.” They walk down the aisle and get married…