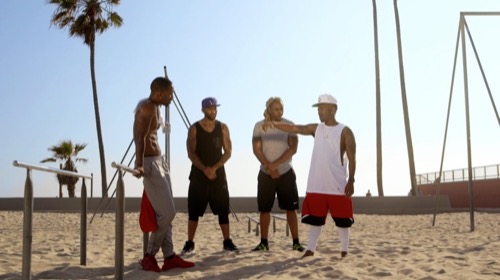 Did you watch last week’s episode where Nikki Mudarris attempted to juggle her relationships with Safaree Samuels and Rosa Acosta?  If you missed it and want to catch up, we have a full & detailed recap, right here for you!

On tonight’s episode as per the VH1 synopsis, “Safaree catches Nikki in the act; and Brandi and Max’s marriage is tested when Max begins working with Masika. Later, Princess is busy planning the wedding, but Ray is nowhere to be found.”

On  this week’s episode of Love and Hip Hop Hollywood Masika is heading back to work after having her baby. She meets up with Max to discuss the possibility of working together on a record. She tells him “I do have one concern. That’s your wife.” Max tells her “Don’t worry about her. She won’t be a concern.

Princess is meeting with the wedding planner to start working on details for the ceremony. She starts telling her about all of the things that she needs to plan for her wedding. Princess tells her “You are freaking me out. All of the stuff you are talking about are things     I have never even thought about.” Diane asks her “Will Ray be part of the planning?” Princess tells her “Yes, because he wants to get married so quickly.”

Safaree meets up with Ray, A1 and Max to talk about their relationship issues. A1 reveals that he and Lyrica have gotten married. Everyone is happy for the two of them. Safaree wants to talk to them about his situation with Nikki. He tells them  “ I really like her, but I think she is seeing someone else even though she says she isn’t.” Ray tells him “If you think she is seeing another woman ask her. Then tell her you want it all.” Safaree agrees with Ray.

Nikki is hanging out with Rosa when Jason shows up. Nikki is upset with Jason because he posted pictures of her and Safaree and then tagged Rosa. She confronts him asking “Why did you post pictures of me and Safaree together?” Jason tells her “You two are two people that we follow.” Nikki and Jason have a heated discussion. Jason tells her “You and Safaree are great together and you have not come out publicly about being together. This is great for our blogs.” Nikki tells him “I don’t care about the blogs or anything else other than Rosa’s feelings so as long as she is ok with things then I am ok.”

Princess comes to Ray’s photo shoot for the new scooter bikes. She is upset and wants to talk to him about the wedding while he is working. She tells him “I have a million decisions to make about the wedding and I need you to help me.” Ray appears not to have heard what she said. Instead he asks her about the voice over for the commercial for the scooter bikes. Princess becomes very upset and starts to cry. Ray notices and comes to her aid. She tells him “I need you to give me my time.” Ray tells her “It is all about you. What do you need me to do? Do you want me to cancel the launch?” Princess says “No. I just need to be a priority.” Ray tells her “You are my only priority. Now come and get in this photo shoot.”

Brandi is at her new store. She is still worried about her relationship with Max. She says “I know that Max is mad about the money, but when he sees what a success the store is he will be able to forgive me.”

Nikki is at her club appearance. Teairra and Masika stop by so that they can meet Rosa. After the introductions are made Nikki and Rosa head backstage. While they are there Safaree shows up. Nikki is shocked to see him . She realizes that she no longer has a choice and she has to come clean. Safaree tells Nikki “I asked you if you were seeing anyone else and you told me no.” Nikki jumps in to clarify “I told you I was not seeing another man.” Rosa speaks up and tells Safaree “I don’t know what you are so concerned about what she is doing for. She is not your girlfriend.” Safaree fires back and tells her “You don’t know what we were building.” Nikki tells both of them “I have been seeing the both of you.” Safaree tells her “I want the both of

you.” Nikki tells him “You have no right to demand something like that.” Rosa tells him “I want you to leave,” Safaree says “I am going to leave and just know I will never see her again.” Once he leaves Rosa confronts Nikki. She tells her “You have to understand that people want to hang around you for different reasons.” An argument ensues between the two women and Rosa walks out.

Willie and Shanda meet up to discuss the state of their marriage. Shanda asks Willie “How many times did it happen with this chick?” He tells her “I met up with her once.” Shanda tells him “I already knew that. I have just been waiting on you to tell me the truth. Now you have me out here fighting for something that is already mine. I shouldn’t have to do that.” Willie agrees with her and tells her “I can promise you that I won’t hurt you anymore.” Shanda tells him  “i think I still need a break to figure things out.” Willie is hurt by the news.

Princess is meeting up with Diane for the cake tasting. Ray is too busy with the scooter planning party to show up. Princess is really upset. Diane asks her “Are you’re parents involved?” Princess says “They’ll be here and I want my dad to walk me down the aisle, but we have some issues.” Diane tells her “I think you need to try and resolve some of those issues before you walk down the aisle because the relationship with your dad will dictate your relationship with Ray.” This makes Princess cry. While Diane is getting the cake tasting set up Princess tries to call Ray. Her call goes to a voicemail that has not been set up for use yet.

Max is working with Masika at the studio when Brandi shows up. She is not happy to see Masika there. She says “Excuse me for being a little discombobulated but what is going on right now?” Masika says “A session.” Brandi immediately goes on the defensive and gets in Masika’s face and accuses Masika of trying to sleep with her best friend’s husband. A heated confrontation ensues between Masika and Brandi during which Brandi curses and swears at Masika. She calls her all kinds of names. Eventually Masika decides she has had enough and leaves the studio.

Once Masika is gone Brandi turns her rage on Max because he didn’t stop Masika from calling her a bitch. Brandi drops money on the table and tells him “I have been working really hard to put back some of my son’s money?” Max tells her “No, You embarrassed me. I don’t care about that money.” Brandi asks him “So I don’t respect your money?” Max tells her “You don’t respect my anything. Another session successfully shut down by Lil B.”