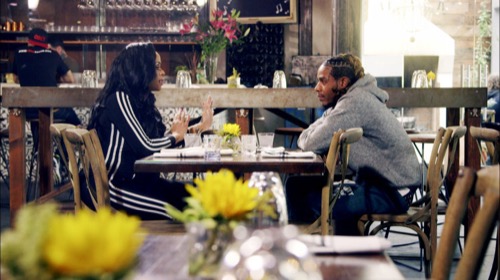 Did you watch last week’s episode where Floyd “A1” Bentley and Lyrica Anderson’s opinionated mothers threaten their relationship?  If you missed it and want to catch up, we have a full & detailed recap, right here for you!

On tonight’s episode as per the VH1 synopsis, “Masika Kalysha hangs out with Fetty Wap; Max Lux’s anger toward Brandi  Boyd persists after her secret is discovered; and Nikki Mudarris’s involved in a new romance.”

This week on Love and Hip Hop Hollywood After one incident between Max and Brandi at the store Max and Ray meet up at the studio where Max spent the night. Max is still upset. Ray asks Max “What are you going to do?” Max says “I don’t know. What I do know  is that I don’t want to go home until she puts that money back and hear her excuses.” All of the madness between his friends has Ray seriously questioning his marriage to Princess.

Lyrica and her mom meet up at the studio to talk about the situation between the two mothers. Lyrica tells her “I don’t want you to not be comfortable coming around while Pam is here.” Lyrica Marie tells her daughter “I just feel like she is always stressing you out and that there is always tension between us when we are together.” Lyrica tells her mother “A1 and I are getting married and we want you and Pam to come together and for our family to be happy.”

Masika heads out with Jason to shop for things for her baby. While they are out Masika tells him “I am going to tell you something that you can’t broadcast all over the internet.” After Jason promises to keep whatever she tells him a secret Masika reveal “I have gone to see a lawyer about putting Fetty on child support.” Jason seems shocked by this. She then goes on to tell him “After I did this he apologized to me and asked if he could be at the hospital.” Jason tells her “He has probably had a conversation with an adult, probably a publicist, and come to the realization that he was wrong for the way he treated you.” Jason also tells her “Fetty has been getting a lot of heat for his behavior online.” Masika says “I don’t know what brought about the change, but we’ll see what happens.”

Safaree is a new rapper introducing himself to Hollywood. He is doing a radio show to try and get his name and music out there. The DJ asks about his ex Nikki Minaj and he tells her “I learned a lot. I was in a dark space for awhile. I have moved on and I want the best for her.”

Masika is meeting with Fetty about her pregnancy. She tells him “When you first called I was a bit skeptical.” Fetty tells her “I want to be here.” Masika asks him “So does that mean you will be back before the baby is born?” He tells her “Yes. I want to be there when the baby is born and I want her to know that I am her dad.” The conversation goes on and Masika tells him “Thank you for being here. I plan to make it as easy for you to see her as possible .”

Ray plans to meet Max at the strip club,  but Brandi shows up. She insists on talking to him. Max is still very upset. He tells her “I want you to understand that things will never be the same. You have your savings and I have mine. We used to be Bonnie and Clyde but not anymore.” Brandi sobs and tells him “We still are.” She tries to get him to understand what she was trying to do with the money. Max does not respond well and once again he walks away from her…

Nikki meets up with Safaree at the pool and the two are hanging out. He tells her “You are the most beautiful person I have ever hung out with in my life.” Nikki tells him “You are so sweet.” He tells her “I don’t want to waste time seeing anyone else.” Then he asks her “What about you? Are you seeing anyone else?” Nikki tells him “I am not seeing another man.” Safaree then presents her with a beautiful handcrafted bracelet. Nikki asks him “What does this mean?” Safaree says “It means that I care about you. Just be good.”

Pam and Lyrica Ann meet up to have lunch and try to hash out their differences,  Initially the two ladies agree that as the elders in the family, they should set the standard on how to behave. Lyrica Ann then says to Pam “You should respect my daughter and A1’s home and not make it uncomfortable.” Pam gets upset. She tells Lyrica Ann “That is my son’s house and I can stay there as long as I want to. Your daughter is the problem.” Lyrica Ann asks her “When are you moving out?” Pam tells her “I’ll go when i am good and ready.”

A1 meets up with the guys to talk to them about the situation between his and Lyrica’s moms. A1 says “I think I am just gonna tell Lyrica that we need to do a dinner with both of the moms and then I am just going to give her this.” He pulls out a beautiful diamond ring. All of the guys are impressed. Ray tells him “Good luck man.”

Masika goes into labor early and when she calls Fetty to let him know he is in New Jersey. She is worried that he won’t make it back in time because her water has broken and the labor has come unexpectedly. Masika has made it to the hospital and her labor is progressing. Fetty is on his way to the airport. Masika says “I really hope that he makes it in time because baby girl is not waiting on anyone,” Fetty manages to make it before the baby is born and Masika is relieved. They name the baby Khari Barbie Maxwell.

Nikki is doing a photoshoot for her lingerie line. She is so impressed with the model that she strips down and joins her in the photo shoot. Nikki then reveals that Rosa is the other person in her life. After the shoot Nikki asks her “If I have a man on the side would you be bothered?” Rosa says “Yes.”  Nikki seems a bit upset by her answer but manages to pull herself together. Rosa tells her “What’s the point of having a man if you don’t know what to do with him?” Nikki laughs.

A1, Pam. Lyrica and Lyrica Ann are out having dinner. Lyrica says “I want us all to be able to come to family functions and be comfortable.” Pam says “I don’t know about that. We aren’t family yet.” Lyrica Ann stands up and makes a toast to Pam moving out of their house. The fight is on at that point! A1 is angry and jumps up from the table. He tells Lyrica Ann “You got your daughter crying. You need to chill!” He then turns to Pam and tells her “Momma you need to stop as well. You aren’t doing the situation any favors. Both of you need to stop!”..